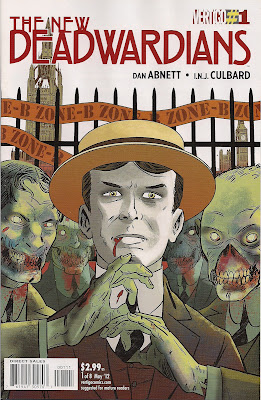 Chief Inspector George Suttle is the last of a dying breed. The only murder squad detective in the Metropolitan Police of 1910, he's not had a lot to do since Londoners changed. A zombie apocalypse decades previously means most people are beyond being murdered - they've either succumbed to the zombie plague or taken The Cure, voluntarily embracing a vampiric state that puts them off the predators' radar.

Not that such terms are used. 'Zombies'? 'Vampires'? How terribly vulgar. No, people are either shambling members of The Restless or stoic examples of The Young. The still-living who can't afford to take The Cure monthly are known as The Bright.

There is a killing at the start of this issue, but as it sees a roving Restless caught in the act of eating his housekeeper, there's no mystery for Suttle to get his filed-down teeth into. 'Filed-down'? Yes, Suttle is one of The Young, resigned to being a vampire but refusing to give in to the breed's baser instincts, their (ahem) Tendencies.

And if this part-precis isn't enough to persuade you to try The New Deadwardians #1, this eight-part Vertigo mini-series likely isn't for you. But fans of alternate histories, and fantasy horror, are in for a breezy treat courtesy of Dan Abnett's clever script and I.N.J. Culbard's dead-on artwork. The dialogue is pure Downton Abbey, with Suttle's short internal narrative guaranteed to invoke empathy in the reader. As well as introducing characters and situations, the issue sets up an intriguing mystery to be solved in future instalments (click on image to enlarge). 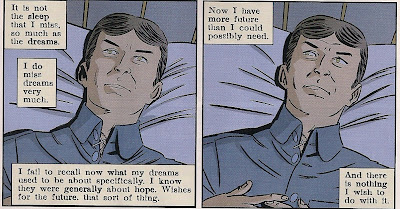 Culbard, meanwhile, does a splendid job of capturing the Edwardian era, with period fashions and real-life streets of London. His people are happily imperfect, and he draws a mean corpse. And as a bonus for architecture fans, Culbard conjures up the planned-but-never-built Prince Albert Memorial Tower, dwarfing the Palace of Westminster clock tower that houses Big Ben.

The sympathetic colouring is, I believe, the work of Patricia Mulvihill, while Travis Lanham may well have contributed the stylish lettering - but as I can't find the creator credits beyond what's on the cover, I can't be sure. It's a shame, and whoever's to blame should be denied The Cure for ever more. I expect they're awfully common.

The New Deadwardians is all very British, but I doubt it's necessary to, say, get the 'Carry on, Sergeant' gag to enjoy this comic. It's a well-crafted opening chapter offering a new spin on the zombie, vampire and historical detective genres. I'd wager that means something for all the family - living and undead.
Dan Abnett I.N.J. Culbard Patricia Mulvihill The New Deadwardians #1 review Travis Lanham Vertigo