A few months ago, excited about the upcoming new Action Comics creative team of writer Greg Pak and artist Aaron Kuder, Anj of the Supergirl's Comic Box Commentary blog page and myself had a wee back and forth. Having been teased by the team that one of Superman's old girlfriends would be making a comeback, we swapped guesses as to who that would be.

Aaron Kuder, who was joining in with the chat, suggested we set up a wager, winner take something.

Suffice to say, Anj got it spot on. And he suggested that we each write a post on the other's final guess. So here goes with a crossover between Supergirl's Comic Box Commentary and Too Dangerous for a Girl. My thoughts on Lana are over at Anj's place even now.

Feel free to let us know who your favourite Superman's Girl Friend is, the fantastic Lois Lane excepted. 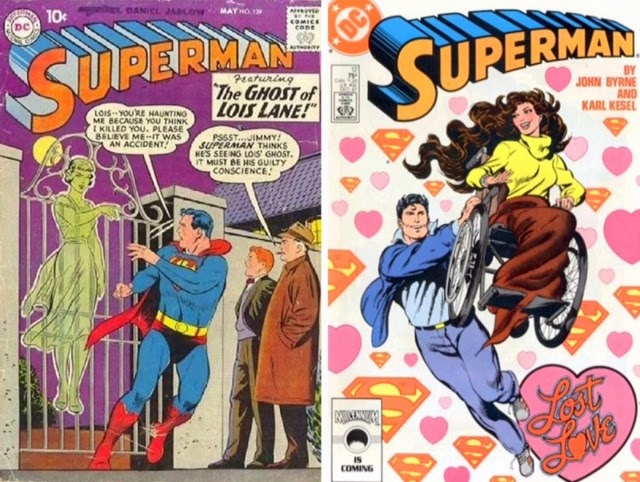 Lori Lemaris is a very interesting character. There is something special about her because she has stuck around for greater than 50 years in the Superman mythos. Whether it is her initials, or the fact she is Superman’s first love, or her secret, people love her.

Her first appearance was in Superman #129 in a story written by Bill Finger (!!) and drawn by Wayne Boring. Surprisingly, she doesn’t grace the cover. In fact, hers is the third story in the issue, behind a Lois Lane ghost story and another where Superman is a fire fighter. Despite that, the story must have resonated because it has been reprinted in many places, usually in ‘Best of’ anthologies. In the post-Crisis era, John Byrne brought the story of Lori back in Superman #12, writing and drawing what is essentially an homage issue (almost a reprint) of Superman #129. Byrne does need to tweak the story a bit and add some modern sensibilities and darkness, but it is uncanny how close the stories mirror each other.

My review will therefore cover both books, placing similar panels next to each other, a way to highlight just how much Byrne must have loved this story. In places I will put similar phrases in quotes. (Click on the images for bigger versions.)

Both stories start with a framing sequence. In Superman #129, Clark and Lois are at a football game and Lois has a blanket over her legs, reminding him of Lori. In Superman #12, Superman is called to see a merman, Ronal, who wants to reminisce about Lori. Both framing stories lead to Superman retelling meeting Lori in college.

On campus, Clark sees a young woman in a wheelchair. She loses control at the top of a hill and is ‘gaining speed’.

The differences in Clark are worth noticing. In the ‘50s Clark is sporting a letterman sweater, glasses, and is carrying a briefcase. In the 80s, he is without glasses, carrying his books loose, and sporting a more athletic jacket. 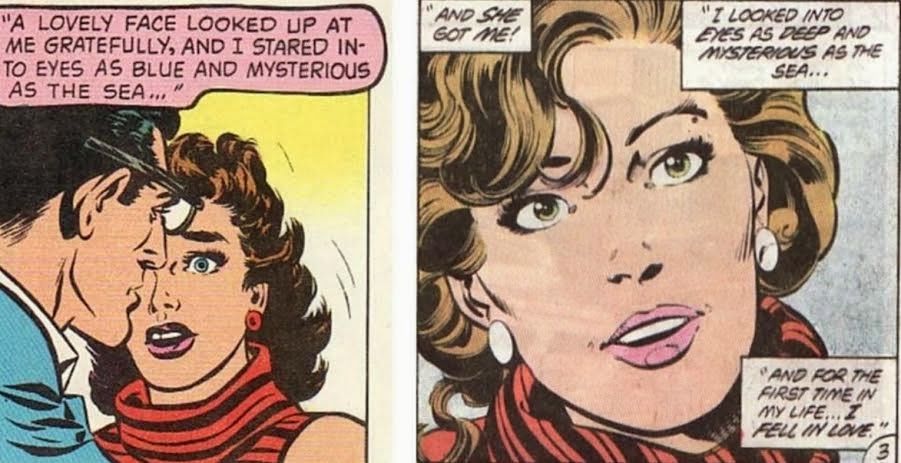 Using his heat vision (or the heat from his X-ray vision), Clark melts the wheels of the chair, slowing it down enough for him to rush up at human speed and catch the girl as she flies from the chair.

Safe in his arms, Clark is struck by her beauty, her eyes ‘as mysterious as the sea’. It is love at first sight. They exchange names.

Now remember, in the 1950s Clark was Superman. He is concerned about hiding his super-identity. In the 1980s, Clark isn’t Superman yet. He is trying to hide that he has powers. Either way, he didn’t think about how to explain away the melted tires of the wheelchair.

Luckily, Lori is quick with an excuse as she smiles knowingly. She posits that the tires melted by ‘friction’ from the runaway chair’s speed. Clark is mystified because Lori says it as if they ‘both know it isn’t true’. Fascinating.

Lori is beautiful, smart, and mysterious. How could Clark not fall in love? The two begin a romance.

Later, while together on ‘the Ark’ a floating aquarium boat at the university, disaster strikes.

Here Byrne diverges from the past. In the ‘50s the boiler in the Ark itself explodes, spilling the students and the fish into the sea. In the ‘80s, Byrne has the boiler in a nearby tug explode, sending that boat careening out of control towards the Ark. 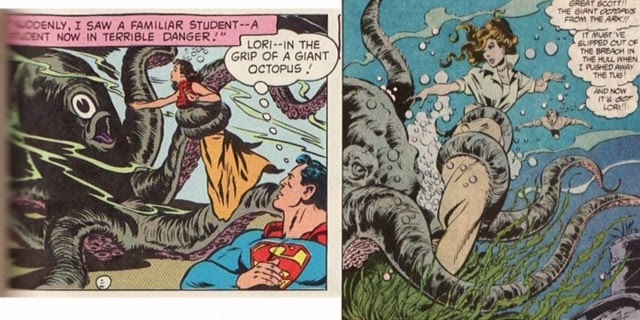 Clark leaps into the water to help. In the ‘50s, he is helping as Superman. In the ‘80s, he is simply Clark. He rescues the Ark in both instances.

But as he swims underwater, he notices Lori in the grasp of an octopus. Things look grim but Lori looks rather calm. And then in both instances, she seems to talk to the octopus, who lets her go and swims away.

The ‘50s octopus looks more like some sort of alien creature. 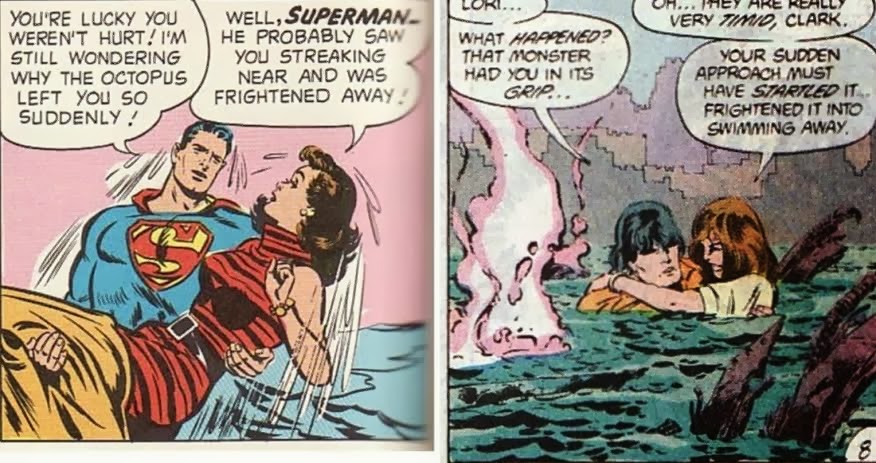 Regardless, Superman/Clark rushes under the water to scoop up Lori once she has been let go.

Again, Lori has a quick explanation for the octopus letting her go. Clark/Superman’s sudden appearance must have scared it away. She couldn’t be talking to it … could she? 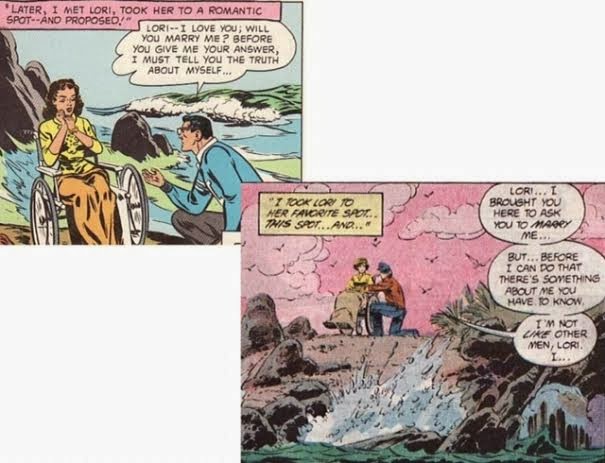 Love is a many splendored thing. Completely lost in love, Clark falls hard. In the ‘50s, there is a great montage of him flying her around the world in her wheelchair (very similar to the cover of Superman #12), bringing an orchestra to her, and carving her face into a mountain.

In both issues, he decides to pop the question, taking her to a romantic spot on the shore and getting down on one knee.

But Lori rejects him. She says she knows what Clark is, intimating that she knows about his powers. They can never be together. He simply can’t be with her. 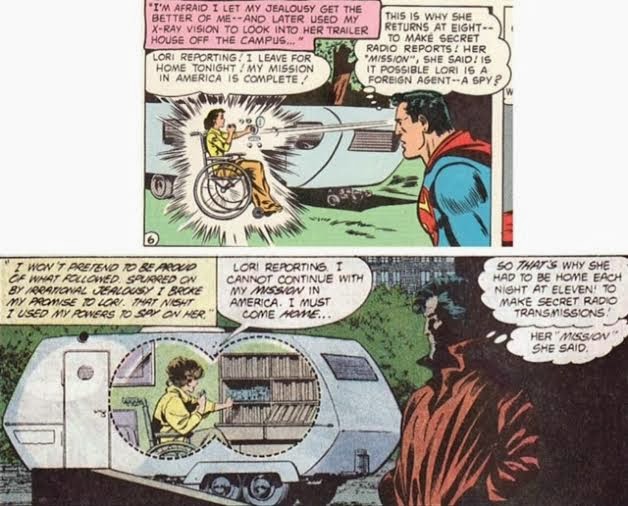 Remember, in both issues this is a young Clark. And he is heartbroken. He can’t understand why she would say no. Fueled by his ‘jealousy’ he decides to spy on her. In both issues, he feels regret for this breach of her trust.

Using his X-ray vision to peek into her trailer home off campus, he sees her using a ‘secret radio’ to talk about her ‘mission in America’. 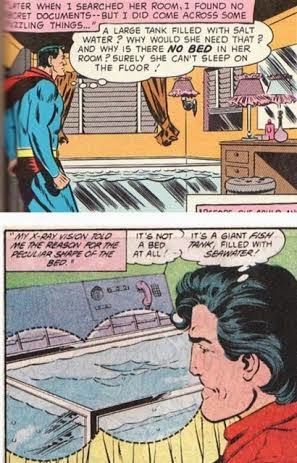 And the mysteries grow.

While scanning the apartment (or rummaging through it in the ‘50s), Clark discovers Lori doesn’t have a bed! She only has a tank of seawater. 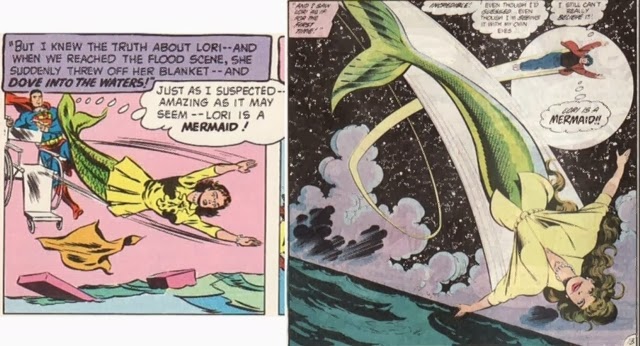 Clark has solved the mystery and goes to talk to Lori about it.

In the ‘50s the two are interrupted by a broken dam and a flood disaster. In the ‘80s she is simply about to head home.

In both though, the truth comes out. Lori is a mermaid!

Again, Byrne does a nice job mirroring things even down to Lori’s shirt. 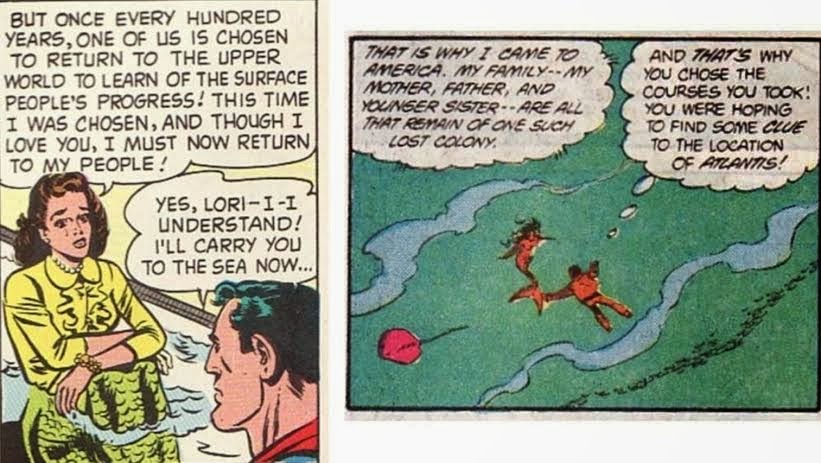 But why was Lori at the university?

Again we have a divergence in the story.

In the ‘50s, when maybe the continuity of the DCU wasn't tight, Lori talks about coming from Atlantis. She was allowed to come up to the surface to see how far humanity has advanced. Her Atlantis was populated by merfolk (despite Aquaman being around).

In the ‘80s, Lori is part of a nomadic group of merfolk, split off from Atlantis when it sank. They formed a colony where they mutated into merpeople and have been searching for the true Atlantis to rejoin their homeland. She was at the university to try to investigate where Atlantis is. 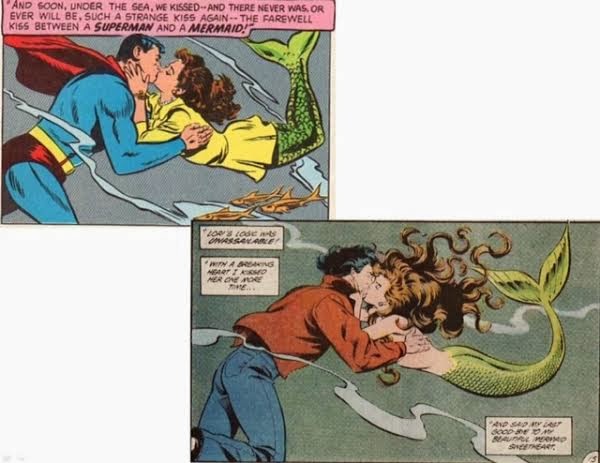 She cannot stay with Clark. She cannot rob the world of his presence. And she needs to help her people. They cannot be together.

But they are able to share one last kiss.

Again Byrne does a great job of giving an homage panel to the original. But why did he have Lori shed her top?

It is on this note that Finger and Boring end the story. 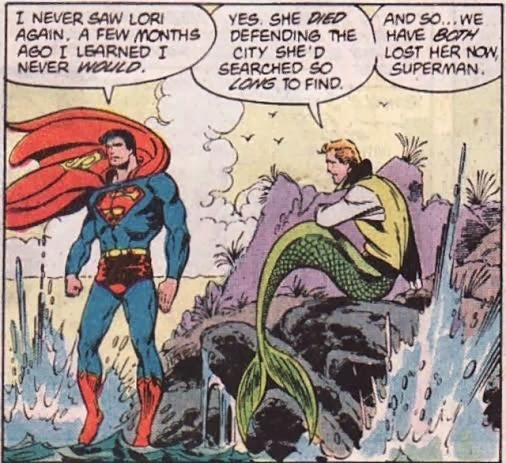 Byrne tacks on a crazy and slightly dark ending.

In the recent past, as Superman and having met Aquaman, Clark now knows where Atlantis is. He scoured the world trying to re-find Lori, heading off to any ‘mermaid sighting’ he can. He finally finds her only to have her stabbed by a crazy sailor looking to capture and sell her. He whisks her off to Atlantis where she survives, but is paralyzed. She then falls in love with her doctor, Ronal! (For me, that is sort of creepy.) When told of this, Superman acts like a spurned lover, angry at both Lori and Ronal until Lori calms him down. That is a little weird.

Then, somehow, she dies defending Atlantis. And today was the anniversary of that death, why Ronal called Superman.

I don’t know if that story of her death has ever been printed. Maybe Byrne just didn’t want her ‘out there’ so he had her killed. And I think she ended up being alive at some point, with legs, and involved in Superman’s life .

Anyways, I love Lori Lemaris and the original story. And I applaud Byrne for rewriting with such appreciation of the original. I don’t know if the attack/paralysis/love of Ronal/death defending part at the end adds much to the original. I like the ending on the kiss moment.

Anyways, hope you enjoyed this look at Lori Lemaris and her origins!