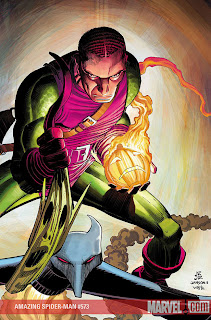 Whoa, a little heavy on the brow, nose and jaw there, Mr Romita. Norman Osborn looks less like the Green Goblin than the Pink Platypus.

Cover apart, John Romita Jr provides first class pencils this issue, as he has in the other five parts of New Ways to Die. Kudos, too, to inker Klaus Janson and colourist Dean White for their parts in making this one seriously good-looking comic book. I'm not a big fan of extra splash pages, but there's a stunning shot of Spider-Man and Anti-Venom high above New York, and another of Spidey surprising Goblin. The smaller moments are equally rewarding, whether it's a surprise for Petey or a shock for Aunt May.

In terms of the script Dan Slott also keeps to the standards he's set in the rest of this arc, giving us pitch-perfect characterisations amid a rattling ride to the conclusion. While the main storyline - the Thunderbolts' pursuit of Spidey for someone else's crimes and the return of Norman Osborn to the webhead's rogues gallery - are tied up nicely, little mysteries continue to build. I'm especially keen to follow Harry's story, after a few comments from his dear old dad, including one that makes it clear that he's still been comics-dead, which confirms that he was still a Green Goblin once upon a time.

So that's Book Six of New Ways to Die, a terrific comic.

Oh, what's this? A back-up? I love back-ups, they're a nice way to help justify an extra-priced issue . . .

. . . oh. It's a self-conscious, self-indulgent bit of brown-nosing towards one of Marvel EIC chief Joe Quesada's pals, Stephen Colbert. I know he's the guy all these distracting posters in Marvel stories have been referring to, but on the basis of this Mark Waid/Pat Olliffe short, God knows what the fuss is about. Isn't Spider-Ham a pig?

Whatever, this is an irritating imposition on an otherwise first-rate issue. Do even American readers give a toss about this ongoing Marvel in-joke? I know I don't, but from the self-congratulatory note on the letters page it's like the Spidey editorial team has cured cancer. Make this a one-off, please, Marvel, and concentrate on telling new tales of Brand New Day Spider-Man - you were doing so well.
Amazing Spider-Man 573 review Dan Slott Dean White John Romita Jr Klaus Janson Mark Waid Pat Oliffe