Batman and the Outsiders 12 review 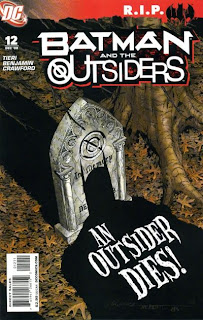 'AN OUTSIDER DIES' screams the cover.

'No one cares,' sighs the reader. Seriously, there are a few Outsiders who have maintained a presence in the DCU in between this book's many cancellations because they bring something different to the party. Katana (tempestuous mystical swordswoman), Metamorpho (conflicted chemical king, Geo Force (mass-moving prince) . . . heck, even Looker (badly made-up slapper vampire mentalist) has her fans.

Then there's Grace (angry strongwoman), Thunder (dull mass inducer), Remac (quirky red Omac) and so on. And yeah, it's one of this latter list who buys the farm this issue. There's some attempt by writer Frank Tieri to make us think the member to die will be someone else, but you'd have to be a pretty new comics reader/Stepford Wife to be fooled.

The book starts at the funeral, with the corpse unrevealed, and then moves back in time. First it's 'Now' before we flash back to 'Two days ago', 'Earlier that night' and 'Two days ago' again (as if 'Earlier that night' wasn't 'Two days ago). It's ineffective and annoying; if you want to see how well the basic idea can work, track down a copy of UK teen TV drama Press Gang's 1991 episode Last Word part 2. Writer Steven Moffat - Dr Who's new showrunner - creates suspense and viewer empathy by skilfully switching between the funeral and the events that led to it, showing us, one by one, which of the regulars is still alive before we finally reach the flashback scene showing the victim's demise. It's a fantastic piece of drama and has been copied a few times since, on both sides of the Atlantic.

And I've spent too much time recounting it, but you know what? The memories are more fun than this comic, which basically features bickering and hysterical heroes failing to do anything useful. Things perk up when Robin shows up and reveals a proper link between this issue's attack on the Outsiders and the Batman RIP storyline trumpeted on the cover, but basically, this is the most missable of comics. Sure, someone dies, but even if they have a fan, they know they can be brought back very easily.

Oh, this book did generate one emotion in me - annoyance at the continuing depiction of Metamorpho as his late 'twin' Shift. This makes no sense - the shapeshifting Rex Mason has always fought against being the freak, and there's no way he'd choose to look even uglier than usual.

Providing the ugly are penciller Ryan Benjamin and inker Saleem Crawford. They do a decent enough job with Tieri's by-the-numbers script, though there's the odd glitch. One page, for example, has Thunder telling Remac he doesn't look so good, at the same time he's grabbing her menacingly. In the previous panel she'd been behind him, so how she could see how he looked? Obviously, he turned round, but the transitional panel was missed out. We should have seen him looking weird.

This is a truly mediocre book, not even interesting enough to be considered actively bad. Never mind Batman, it's RIP my interest.
Batman and the Outsiders 12 review Frank Tieri Metamorpho Ryan Benjamin Saleem Crawford