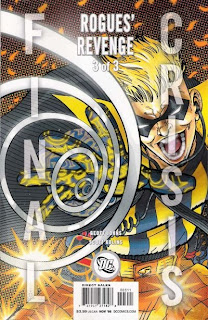 And so the first Final Crisis spin-off mini winds up. The Rogues' quest for revenge against teen clone speedster Impulse for persuading them to kill Bart Allen concludes. And it isn't pretty.

It is pretty entertaining, though, with tons of excellent character moments for Captain Cold and company, a turning point in the life of Zoom and an insight into Final Crisis baddie Libra's abilities. The big problem with this story - and it's a tad fundamental - is the Rogues' assertion that Inertia deserves to be put down like a dog for Bart's murder, and they don't. Yes, he persuaded them to do the deed, but they're all equally culpable. If anyone could try for a spot of mitigation, it's Inertia, a kid among adults.

Not that I'd forgive the murderous little snot, but he's a psychologically disturbed clone, whereas the Rogues are presented as capable of evil acts, yet strangely likable. Cold killed his dad but the old man was a git. Weather Wizard slew his brother but he was desperate. Heat Wave set fire to his home and watched his family die, but, hey, he's a pyromaniac. And so on.

As if aware that there isn't that much difference between the adult Rogues and Inertia, writer Geoff Johns ups the latter's evil here, having him do something truly unspeakable. It makes for terrific drama, but the Rogues leave this series, if anything, seeming nastier - and certainly more self-deluded - than they entered it.

Artist Scott Kolins just gets better with every outing; the definitive interpreter of Keystone City and its inhabitants. From the hyperkinetic Trickster cover through to the ominous final splash, this is a masterly performance. His artistic choices up the impact of Johns' impressive script, for example when the Pied Piper makes his big entrance, and Mirror Master shows the true extent of his surveillance capabilities. Colourist Dave McCaig adds his own layer of goodness.

These three short issues haven't redeemed the Rogues to the semi-cuddly - roguish, I suppose - position they occupied when Johns was writing them regularly, but it has emphasised what a powerful collection of villains they are, in terms of armoury and personality. And it's whetted the appetite for next year's confrontation with the returned Barry Allen who, for a speedster, is a long time coming.
Final Crisis: Rogues' Revenge 2 review Geoff Johns Scott Kolins