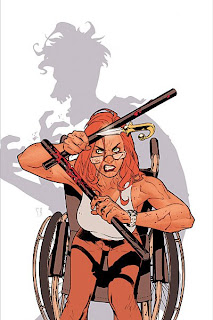 The Platinum Flats storyline continues with Misfit, Infinity, Lady Blackhawk and Huntress attacked by the Silicon Syndicate, and Oracle confronted by the Joker. While the former thread interested me, it was the latter that had me excited. And writer Tony Bedard didn't let me down, as he gave us the encounter I've been wanting a couple of decades for, ever since Barbara Gordon was crippled by the Clown Prince of Overuse in The Killing Joke. It's such a satisfying scene that I won't spoil it, I'll just say that it was well worth the wait.

Artists Claude St Aubin and John Floyd do a terrific job illustrating the issue, bar one moment that should be drawn but isn't - Babs moving to block a knife thrown by the Joker; we see him toss, we see the blade in her cane, but the intermediate shot is missing, with only the barest of speed lines to indicate the stick's been moved at all. That aside, I'd love to see more of them around the DCU after BoP goes RiP.

It's a shame this book is being taken away from us, as Bedard was really making it his own; I only hope it returns following the Battle for the Cowl in the Batman line, and Oracle's promised mini series.
Birds of Prey 124 review Claude St Aubin John Floyd Tony Bedard