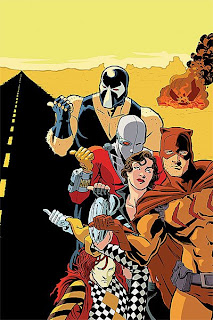 'Unhinged' continues with our villains united against a bunch of rival baddies out to get the mysterious card for the enigmatic Junior. Along the way we hear something of how the Tarantula came by said maguffin, and get our first glimpse of the newest member.

Said newest member is one Jeanette, and she looks like an updated Harry G Peter character, with hair like a meringue, dragon lady skirt and the reddest of lips. She also has a near-naked senator hanging upside down but we'll pass over that. It's a one-panel appearance but I already want to know more about what Jeanette can do.

There's full naked in a memory dream suffered by Catman, as we learn more about what happened in Africa prior to issue one. Suffice to say it demonstrates both his sense of irony and skill at hiding his crotch from interested readers (ahem).

There are a couple of sicko scenes here, but they fit the tone of the book and so don't annoy me the way recent ultra violence in Teen Titans has. This is a series all about nasty people, and some are more evil than others.

The special guest villains are Cheetah, Bolt and Black Spider and writer Gail Simone does a sterling job with them. For one thing, she emphasises the speed and strength that allows her to take on Wonder Woman, and has other characters recognise that she's not just another wannabe in a catsuit. For another, Gail remembers that Barbara Minerva is English and produces dialogue with the requisite tinge of Britishness. 'My word. What a great lot of fuss you make,' she sneers as she dismisses Bane and Scandal with ease. Cheetah sounds for all the world like the anti-Mary Poppins.

And Blue Devil cast-off Bolt came across as formidable for the first time ever, particularly in a wonderful moment that sees him threaten Cheetah and Black Spider. The latter doesn't do anything much this issue, barely speaking. I suspect he's not who he claims to be - that's an all-over mask so it could be anyone, never mind any of the three known Spiders. Maybe it's Nightwing, keeping tabs on Tarantula, her having raped him back in the day and all. (Two spider characters, a pair of cats - what could it all mean?)

At issue's end we finally learn the secret of the card and it makes so much sense, given the Cheetah and Bolt's comments earlier in the story, that I'm kicking myself for not figuring it out myself.

The only jarring moment came when the Six decided to leave the horses they'd been escaping on behind because 'we're way too obvious'. Surely it's better to be riding away on horseback while clad in colourful garb than on foot adorned in said supervillain wear? You're 'obvious' either way but one of them gives you a better chance of escape.

The art by penciller Nicola Scott, inker Doug Hazlewood and colourist Jason Wright is tremendous. The figure work is attractive, with clear storytelling and clever use of body language (Ragdoll is never less than delightful, in his creepy way). The colour work is especially good this month, with appropriate choices for every scene, whether it's a darkened airport or sun-seared Africa. There's a standout silhouetted shot of Catman in this second sequence which would be the image of the issue but for a splash featuring two bickering villains that crackles with dynamism and power.

This sterling issue is capped off with a cracker of a cover from Nicola, with our protagonists out to hitch a lift. It has a Kevin Maguire vibe, but there's a pleasingly richer line. The illo is witty and gives us a particularly soulful Catman; it seems Gail isn't the only creator with a crush on this character. I don't know if Nicola did pencils, inks and colour here - I suspect so, as it's so different from the interior art. Different, but equally gorgeous.

Secret Six is shaping up to be one of DC's most enjoyably impressive books, with the creative team demonstrating a unified vision and the craft to follow through. I'm ready for an annual - come on, it's been three issues!
Doug Hazlewood Gail Simone. Nicola Scott Jason Wright Secret Six 3 review