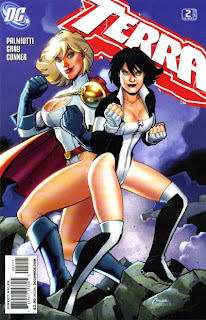 In which our mysterious heroine takes exception to Dr Midnite examining her while helping her recover from a battle; she teams up with Power Girl to fight Silver Banshee, then ancient god Gorsedd; newly created element master Richard ponders his future; and Geo-Force gets some aid defending Markovia from zombie master Deadcoil.

That's not bad for 22 pages, there's plenty of popcorn there. And even better than the action is the characterisation. There's not just Terra's attitude towards probing, there's the beginning of a friendship with Power Girl; a great discussion between Richard and fellow evil industrialist/sex doll Veronica Cale (the underwhelming Wonder Woman antagonist) about whether he should use his new power for good, evil or real estate deals; Terra's novel way of dealing with Silver Banshee; her actions when a character dies; and a chat with Geo Force.

There are also some amusing touches in the script, such as the description of Power Girl as a 'prominent member of the Justice Society' and Conner's art, for example Dr Midnite clearing up Hooty's owl droppings.

I was underwhelmed by the first issue of this mini series http://dangermart.blogspot.com/2008/11/terra-1.html but this is much more to my taste. The story rolls along like a rollercoaster but never feels insubstantial, and there's a confidence to the script and art that's a pleasure to experience. It feels like the creative team could continue this book for far more than the four issues they have. Even the mystery of this Terra's connection to the original is more interesting than expected - it helps that Gray and Palmiotti actually start giving us answers. I hate the Wolverine approach to backstories, which sees the origin withheld for so many years that it can't help but be a letdown when it finally comes.

Conner is also firing on all cylinders, managing to balance her cutesier tendencies with the drama demanded by the script. There are some lovely bits of body language, such as Power Girl on the splash page, somewhere between bemused and embarrassed, and Terra's frustration towards Silver Banshee. This performance bodes well for this creative team's upcoming Power Girl ongoing and, more immediately, the rest of this series.

Oh, and per my comments on issue 1, it turns out our heroine wasn't lifting the logo last month, that's just where it lives. Well there you go!
Amanda Conner Jimmy Palmiotti Justin Gray Terra 2 review