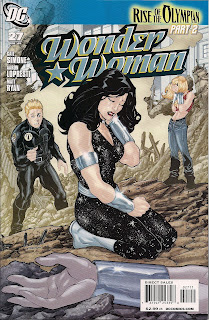 Superheroes have a code against killing. Everyone knows that. A lesser known understanding is the Code of Dibs. Members of a heroic family can claim a conflict as their own even if regular, non-powered people are threatened and other heroes are willing and able to help out. The rule is amply demonstrated this issue as Donna Troy calls Wonder Girl about Diana's thrashing last issue by villain du jour Genocide. (Click for a close-up.) 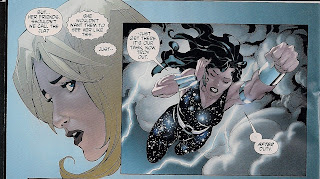 Yep, Diana is half-dead, civilians have been gutted and the creature responsible is loose, but does Donna call in the reserves? Nope, it's a matter of pride that Diana's dignity is preserved.

That's the dignity of Diana, a woman who struts around in a star-spangled swimming costume . . .

Dearie Lord, Donna Troy, has Dick Grayson taught you nothing? Get a clue!

That's the one bum note in an otherwise exemplary issue. It's part two of Diana's big storyline, the Rise of the Olympian, and it's full of incidents to intrigue - Athena's apparent manipulation of the reborn Zeus, who recalls the amnesiac Amazons to Paradise Island; Nemesis's declaration of his Amazon status to a bemused Donna; Genocide's incorporation of the lasso into her very body; mass murder at the Department of Metahuman Affairs; the JLA cavalry (they're pros, they don't wait to be invited!); and a startling offer by Zeus to Hippolyte.

And Wonder Woman? Poor Diana has little to do but moan intermittently, but this issue was so good I barely noticed her lack of impact. She'll be back, I know, but meanwhile I'm just thrilling to the fireworks being lit under her world.

Providing the sparks are writer Gail Simone, penciller Aaron Lopresti and the rest of the creative team. Simone works hard to provide a variety of voices as she plonks her characters into dire situations either physically or subtly dangerous. Lopresti and inker Matt Ryan, meanwhile, ensure the panels drip with drama. I especially loved that they provided a moment of pure comic art, via judicious use of sound effects. 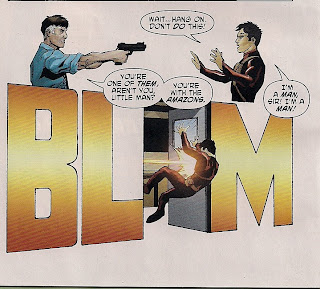 God bless them for embracing the grammar of the comic book form; I'm so tired of artists who try for the 'cinematic' - big dull panels, sometimes featuring nothing more than big dull buildings. Nope, I'm all about the fun.

And that's what this issue is, despite the carnage (hey, people are being slaughtered, but they're pretendy people!). Fun. And the Olympian hasn't even risen yet!
Aaron Lopresti Matt Ryan Wonder Woman 27 review; Gail SImone