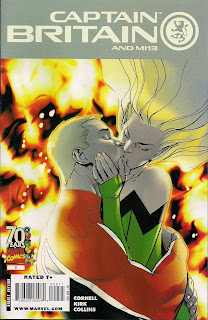 Last issue the team's tussle with an evil dream lord stepped up a notch when it was revealed that British not-very-super soldier Captain Midlands had betrayed them. The Plokta thickened . . . a character previously considered a joke gained poignancy, while dropping his colleagues in the *&^*%$&- (actual quote - I get to use almost-cusses in this review, as CB/MI:13 is a T+ book, according to Marvel's rating system).

This issue the storyline is tied up and along the way we get numerous 'hoorah' moments in which our heroes shine. Which makes a very dark scene near the end all the more shocking, and that's a moment I won't spoil. That's followed by the revelation of who MI13's next foe will be; suffice to say it's a villain I never expected to see, despite it being utterly logical given a recent addition to the team.

Paul Cornell writes up a storm here, cranking up the tension and excitement while never forgetting the humanity. Even Master of the Mindless Ones Plokta gets a personality; yes, it strays dangerously close to pantomime Demon King territory, but never quite crosses the line.

This review writing lark is a bugger - there are so many great moments in this issue that I want to show them. For example, my favourite line in any comic so far is featured here, but reading it as an extract wouldn't be half as much fun as coming across it on the page; suffice to say it's story page 11.

One thing I will print here is a panel that comes post-battle. The magic that gave people their heart's desire has gone, or perhaps it's spilled out. Maybe the latter, because to me, that fellow at the centre looks like the recently deceased John the Skrull - is it too much of a stretch to say that his resurrection was one of Pete Wisdom's heart's desires? (click to enlarge):

Maybe not, but I can dream!

Joining Leonard Kirk on pencilling duties this time is Mike Collins, a Brit I've been watching since his fanzine days - would someone please give him a regular gig, cos he's the business? For one thing, he should be this book's regular pinch-hitter, at the very least he should get a Meggan-heavy issue to draw, as his version of Mrs Brian Braddock is utterly gorgeous. She's actually doing well this month, as cover artist Stuart Immonen comes up with a marvellously soppy cover image.

Marvel recently renewed their order for this series with Cornell - hey, these are tough economic times - and it's great to see that a quality product has found an audience. So, Paul Cornell, now you have the room, when's the team coming to see me in Edinburgh? We've not had any heroes here since the X-Men fought Proteus on Arthur's Seat. Wouldn't you just love to put Pete Wisdom in a Jimmy wig?
Captain Britain and MI:13 9 review