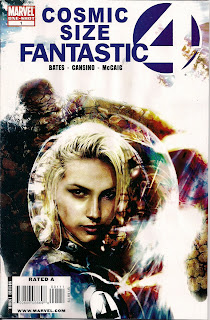 Reed and Ben bring something nasty back from a pocket dimension, necessitating a two-day quarantine for the FF and kids Franklin and Valeria, who soon notice that their elders are acting jolly oddly.

That's your basic story from Cary Bates and Bing Cansino and it's absorbing enough. What really had my attention more, though, was the ageing of Valeria Richards. Last time I looked she was a toddler, here she seems older than her big brother at times, with smart arse dialogue to match (click for a close-up).

I know Val, like Franklin, has been seen in an older form, as the second Marvel Girl, but that was a time paradox deal; so far as I know, since being born to Sue Richards she's been growing at a normal rate. Having her suddenly so old, and knowing is jarring.

At 32pp, this looks to be an inventory tale intended for a $3.99 annual. So why is it backed up by an early John Byrne FF tale (the throwaway Spinnerette story from 237) and bumped up to $4.99. There's no thematic link between the stories that I can see, and the Frankie Raye subplot will have newer readers scratching their head (hey kids, she was a human torch too!). It just seems like a way to bump up the price, and having been caught out once I'll be wary of buying another book with a similar title (I ignored the recent Thor God-Size Special which, as well as having the hyphen the FF book lacks, a quick Google tells me was all-new).

Longtime DC writer Cary Bates, recently returned to comics, doesn't seem quite comfortable with the FF, but he's a talented guy and with time would find their voices. It's just a shame Editorial didn't sort his Valeria out. Bing Cansino (great name!) is new to me, and seems to have been told to ape current FF penciller Bryan Hitch, but he gets the story told. Francesco Mattina's cover is very nice. Irrelevant, and showing only two members of the FF, but nice nonetheless. It's not worth the cost of this mediocre issue, though.
Bing Cansino Cary Bates Cosmic Size Fantastic 4 1 review Francesco Mattina