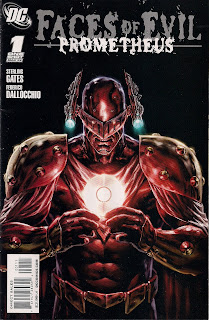 I very nearly didn't buy this. Prometheus was created by Grant Morrison as an arch foe for the JLA, but didn't catch on. Maybe it was his shtick - he could download data on any foe and instantly beat them. Even in a world of flying men, a villain who stops mid-battle to slot CDs into his helmet took some believing. My big problem was that he seemed to scream Big New Foe - he was trying too hard. I like my big villains to earn respect over time Anyway, he faded away after being roundly defeated by the JLA. Later, there was an impersonator, but no one cared.

What did get me to buy this book was the writer, Sterling Gates, who's been doing a sterling job as the new guy on Supergirl. So how did he do?

The issue began with a smartly done recap of how Prometheus got to Blackgate Penitentiary and gives a logical reason for his return - the mental prison imposed by J'onn J'onzz disappears with the Martian Manhunter's death in Final Crisis. The rest of the issue recaps his origin and shows Prometheus reclaiming his gear, and name, from former sidekick Chad, who usurped his gig as Prometheus II and failed to make him proud. The intensity of a fight scene with obscure DC heroes the Blood Pack goes some way to showing us what a hard get (that's 'bad-ass' in American English) he is, but then Gates goes too far. He doesn't stop at Prometheus chopping off the hands of Gunfire, he has Anima sliced in two as she follows Prometheus through a closing teleportation hole. It's gruesome stuff, easily as grisly as scenes penned by his mentor, Geoff Johns.

OK, despite having had their own series for awhile, Gunfire and Anima likely disprove the adage that 'every character is somebody's favourite'. But I really don't like Character A maiming Character B purely to show how tough the former is. Heck, I don't even like the way Prometheus deals with his former protege; it's more violent than the comic needs. Just because books can get away with the nastiest option these days doesn't mean they should go that route.

Federico Dallocchio handles the entire art job. He's a new name to me, but on the basis of this issue I hope to see him get a regular gig. His layouts work well, he makes some interesting perspective choices and he's great with facial expressions. And on the colour side, he's very good at skin tones.

In all, this was a decent read, a well-crafted book (I loved the old three-act division). It still fails to convince me that the fundamentally daft Prometheus deserves a place in the big leagues, but time will tell.
Faces of Evil: Prometheus review Federico Dallocchio Sterling Gates