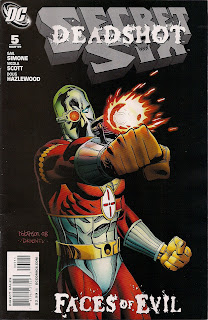 Another month, another issue of one of DC's most consistent books. I was afraid the company's Faces of Evil linewide stunt would derail the ongoing Get Out of Hell Free card storyline, but all it means is a Deadshot solo cover by Andrew Robinson, along with his narrative PoV. It doesn't tell me anything I didn't know about hired killer Floyd Lawton, but it reinforces the fact that he's one of comics' most interesting villains. Readers newer to the character than I would likely lap it up.

There's also internal dialogue from Bane, captured and tortured by the vile Junior, and here I'm the newer reader, being familiar with the character only from scattered guest shots over the years. He's a more compelling soul today than the drug-pumped thug from the Knightfall storyline, admirable in the way he refuses to be cowed. The Bane scene leads to the eventual reveal of Junior's lineage and I'm delighted to see that a few fans here and there (on podcasts I've heard) guessed pretty much correctly.

The script from Gail Simone continues to be a delight, ferrying us through the typically twisty-turny chapter. It doesn't matter whether we're talking main character or villainous henchmen, the players come alive. And as dilineated by Nicola Scott and Doug Hazlewood (with a hand here from fellow inker Rodney Ramos), they look alive. The team, aided by colourist Jason Wright, can even make us feel the emotion of Bane while his head is bowed, and his eyes closed (click to enlarge): 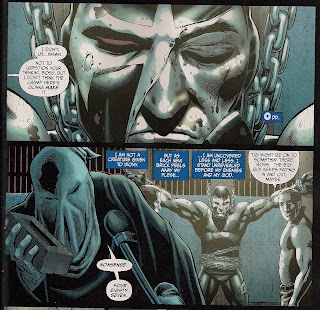 There's a sad end here for one character I've been enjoying a great deal and something of a comeuppance for the overexposed, annoying Cheshire by one of the most intriguing new bad girls, Mistress Jeannette, and the tricky Tarantula. A bunch of other baddies get a good seeing too and the book closes with the most twisted happening yet - and thank God it's one we don't see.

If you like sick supervillainous fun, I can't recommend this book enough; here we have a creative team that really know what they're doing, and they're doing it for you. So join the Secret Six - you may even survive.
Deadshot Doug Hazlewood Gail Simone. Nicola Scott Jason Wright Junior Rodney Ramos Secret Six 5 review