Batman and the Outsiders Special 1 review 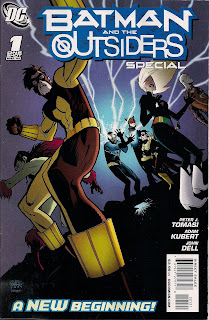 So, what happened to the Wayne fortune when Batman (comic-book) died? Alfred spent it on hair plugs. Seriously, have you ever seen such a luxuriant mane on the faithful manservant (below)? 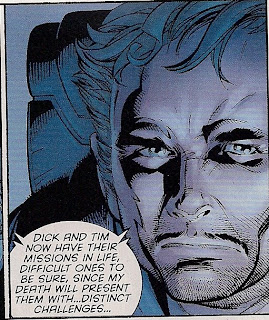 The ghost of Bruce Wayne isn't half making him work for it, though, asking Alfred to get the Outsiders back in the game. Well, it must be a week since they last disbanded. It's what they do.

Really, it's quite impressive how DC just won't let the Outsiders die. This must be the third relaunch since the team returned following the execrable Graduation Day crossover a few years ago. They never really connect with readers, but they won't go away. This time DC is going retro and having already had Metamorpho, Katana and Geo Force around, they're bringing back Halo and Black Lightning and adding two new members, Owlman and Creeper.

I hate Creeper, let's not talk about him and he may go away.

As for Owlman, it looks as if he won't be Alfred, as some fans - with an understandable degree of incredulity - expected. It's likely Roy Raymond Jr, son of Fifties DC character Roy Raymond, TV Detective and recently seen in Tom Peyer's too-short Flash run. He seems to have lost a bit of weight since then, taken a few martial arts classes and become more likeable; he's worth watching, someone a bit different from your usual team member.

As for the other members, Katana is more interesting here than usual, being less acerbic than is often the case (perhaps DC editorial has decided that as Dr Light II is back in the JLA, she can be the cranky Asian lady hero). She does have a bit of a gloomy moment, by the graves of her husband and children, so let's hope the Outsiders cheer her up.

Just don't ask Geo-Force to do it, he's twenty past miserable, still carrying around the suicidal feelings dumped on him in the awful DC Universe Last Will and Testament 'special'. Prince Brion's hobby these days is sitting in a hole in the ground, feeling peaceful. What a poltroon. Oh all right, it's apparently healing him from the injuries received in the special, but I still say he's nuts. The apple doesn't fall far from the lunatic half-sister.

It's years since I've seen Halo, but here she is, at the rebuilding of New Orleans, er, cheering people up by levitating them. So she's as simple-minded as ever, then. Still, at least if she's busy in BATO Geoff Johns can't rewrite Halo's origin to make her colour-based powers part of his pretty Green Lantern mythos.

Black Lightning is currently part of the JLA and people seem to like him there, so unless he's leaving that team, he's going to be knackered after a few months on this team too. Still, maybe he can tap into a lightning storm for energy, as he does here. I like Jeff, but I really don't want him taking up spots on two teams; I suspect sentimentality will prevail, and DC will leave him here awhile.

Metamorpho's been (comic book) dead, but he returns here, in a hugely unlikely manner. Still, it's original.

And that's the cast for this first issue. I find it rather irksome that the book is kicking off with yet another of Batman's contingency plans. It's a huge DC cliche, it would have been far better for Alfred to have had the idea to run the Outsiders himself. As it is, Bruce Wayne looks hugely selfish and manipulative, and that's a Batman I've tired of over the last decade and more.

That said, this is a well-crafted tale. Peter J Tomasi, who provides the 'story and words' - an overegging credit if ever I saw one, but he gets it in the excellent Nightwing too, so must like it - provides a textbook 'gathering of the team' tale. The heroes are dispersed, Alfred quests to bring them together, while Batman's true motive for starting the Outsiders, several continuities ago, lurks in the shadows, to be revealed in good time.

That's actually annoying, the notion that all those years gone Batman lied to the Outsiders about why he brought them together. I read those stories. I know why he brought them together. I'm pretty sure Batman had thought balloons back then, backing up my impression. Now, it looks like we're going to be told Batman was selfish and manipulative pre-Crisis. Which he wasn't.

While it's a decent book, this special lacks the spark Tomasi has brought to Nightwing, so let's hope that once the groundwork is laid he'll be able to surprise me. 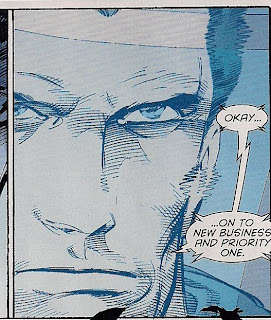 The art is pretty attractive, with Adam Kubert experimenting with page and panel design, but never to the detriment of the story. Apart from the oddly coiffed Alfred (brother Andy gets it right in this week's Batman), and his Bruce looking like Ra's Al-Ghul (right) due to Kubert's apparent disdain for eyebrows, I've no quibbles. Inkers John Dell and Sandu Florea, and colourist Chris Chuckry, keep up the standards. And Andrew Robinson provides a striking cover - odd, but striking.

Steve Wands does a bang-up job on the calligraphy, and maybe he understands what he had to letter preceding a way-too-grisly final scene: 'I relinquish the duties of my thrasher . . .' says a cultish lackey. Thrasher? Farm machinery? Songbird? One who thrashes? (Marvel have one of those, he's a bit rubbish). If I buy next issue for any reason other than the intriguing Roy Raymond Jr - it certainly won't be to find out what Batman's Secret Plan is, cos that'll be spurious as heck - it'll be to learn what a thrasher is.
Andy Kubert Batman and the Outsiders Special 1 review Peter Tomasi