Age of the Sentry #6 review 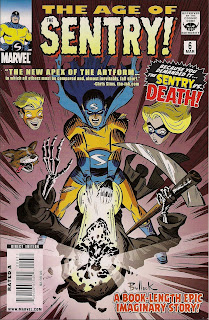 I'm no fan of the Golden Guardian of Good in modern-day Marvel - too often he's the weeping fall guy - but the first five issues of this six-issue mini were a delight. Writers Jeff Parker and Paul Tobin, and an artistic team led by Nick Dragotta and Ramón Rosanas, produced issue after issue of Silver Age stylings. In stories that were simple but never simplistic, tales that looked back on Sixties Marvel and DC with affection rather than cynicism, we were introduced to Rob Reynolds, top entry man for Excelsior Encyclopedia, his girl Lindy Lee, sidekick Scout, pet Watchdog and enemies Cranio the Man with the Tri-Level Mind, Gorax and the Void.

Occasionally though, there were darker moments, when the Sentry's perceptions changed, when we saw that the Reed Richards of the modern Marvel Universe was telling these tales to son Franklin.

And now, issue six, the Story Mart Never Demanded! It has the Sentry learning that everything he thought he knew was wrong, and while the final twist is clever, 'the Death of the Sentry' does its very best to squeeze all the fun out of the previous five issues. Instead of the super-souffle we've had so far, there are pages and pages of exposition pudding (click on image to taste it). 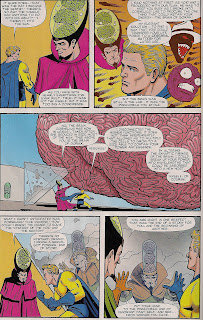 That little chat goes on for eight pages and it saps the spirit like the Void sucks up the Sentry's powers as we reach the big finish . . .

. . . and then Reed appears, all comics-realistic and reassuring Franklin that the scary bedtime fable he's heard was simply 'one of my theoretical mental exercises to help me brainstorm'. Whatever you say Reed. We know you're deliberately making Franklin, your Celestial-powered son, suspicious of a supremely powerful, yet gaga, hero, in the hope he'll take him out one day.

Well, it might as well be, because while well-crafted, this issue was such a downer. Anyone who likes metafiction more than metahumans will likely love it but I think I'll rewrite my personal continuity so that I never read it. Instead, I'll hug those five gorgeous gems that came before it.

This conclusion did, though, contain one of the funniest panels I've seen this year. 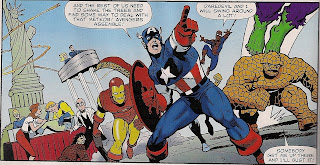 More of this sort of fun please, chaps - everything doesn't have to be linked to the grimmer world of modern Marvel.
Age of the Sentry #6 review