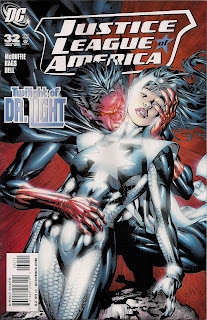 Last issue was awful, as Black Canary fought the one foe no heroine can defeat - DC editorial fiat - and she disbanded the team.

This month, the members who never actually quit, got injured or died just ignore Dinah's edict and get on with League business, hoping that she'll step into the role of chair again soon. And good on Vixen, Firestorm, Zatanna, Dr Light and Green Lantern John Stewart for showing true JLA spirit. Yes, they admire the big three, but they refuse to undersell themselves - they're a powerful quintet and plan to find new members to join them.

A bunch of heroes not at the forefront of DC's various crossovers and events allows writer Dwayne McDuffie to relax and let the characters sing. Every character here is on form, showing intelligence, wit and determination to do the right thing: heroes all. I know Len Wein is coming on board to write a couple of issues but I really hope McDuffie gets to play with this cast for awhile. He really knows the League, those present, and those absent: 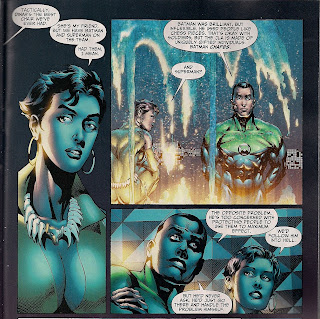 There's some nice action to boot, as the Shadow Thief and Starbreaker are turned up a notch in the threat stakes as the Milestone Universe storyline toddles along.

Rags Morales and John Dell do a generally nice job on the art. There are some clunky moments (such as a shot of the JLA cavalry arriving) but there are plenty of attractive ones too (the meeting, the Starbreaker and Shadow Thief depictions). Hopefully next issue will look consistently good. And Zee will wear her top hat throughout . . . Zee should never be seen without her topper, otherwise she looks spookily like former Bionic Woman Michelle Ryan.

A shout-out to colourist Pete Pantazis for a nice job throughout and, especially, a tricky scene set in an all-light jail cell. He also does good work on Ed Benes' cover, helping make a well-known fantasy scene seem fresh.

A terrific issue, then, and it's about time. More please.
Justice League of America #32 review