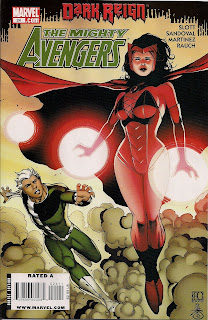 The Mighty Avengers are staying together as a team and shooting around the world at the behest of the Scarlet Witch. Hank Pym, the new Wasp, is apparently carried away by his sudden knack for running a team and happy to let the Witch hand out missions. Only Cassie Lang, the tragically named Stature, is uncomfortable at being shepherded around by the woman who killed several Avengers, including her father Scott, the second Ant Man. Hank says he's aware of the threat Wanda could still pose but wants to keep his enemies close. He's certainly doing that - 'Wanda' is actual Loki, goddess of cross dressing.

Meanwhile, Quicksilver is chasing round after the new team and Norman Osborn's evil Cabal is worried by the threat they may pose. And bitching - what a bunch of moaners. Doctor Doom is projecting a pretty face but his personality remains pretty rotten. Jumped-up nobody punk the Hood is rattling Osborn's cage because the Punisher came after him. And so on. Cabal member Loki is stirring the pot here too and it's fun to watch.

I find it hard to believe none of the experienced members are twigging that this isn't Wanda - since when did she remain in astral form, for example? - but I'm sure this will change soon. With eggheads like Pym and Amadeus Cho on the team, a rat will be smelt soon (though knowing writer Dan Slott, it's Jarvis who will supply the cheese).

Nice bits of business include Norman Osborn's creepy use of Black Goliath's exhumed clavicle, Jocasta taking drastic action to escape HAMMER agents and the Mighty Avengers geting ratification from a global peace organisation with the best acronym ever. My absolute favourite moment, though, came when the press challenged Pietro over his rather dubious activities over the past few years (ie he's been a deluded, villainous monomaniac scumbag). 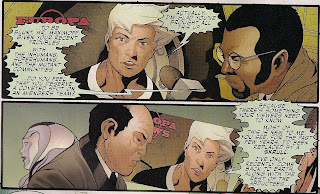 In the words of Paul Simon, Pietro - like Hank - is getting a shot at redemption and I'm glad to see it. I've not enjoyed his journey over the last few years and if an amusing lie can put it behind us, fib away, Pietro.

Slott has crafted a wonderful script here, blending action and adventure in, as they used to say, the Mighty Marvel Manner. And I couldn't be happier.

I'm also delighted with the art, as penciller Rafa Sandoval and inker Roger Bonet Martinez fill in for Koi Pham. Under them, the team seem sharper, more alive and I'd be delighted if they came on board for a run. Completing the pages are letterer Dave Lanphear, whose bubbles seem bolder than usual, and colourist John Rauch, who dares to be bright.

It's a fantastic package, making this the best issue of Mighty Avengers since it launched. If there's any justice, readers will assemble in droves.
Mighty Avengers #24 review