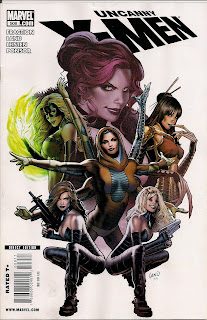 Before I die I want to see Greg Land draw Ego the Living Planet. I want to see Jack Kirby's mad world sporting a cheesy grin worthy of Vogue magazine. Maybe he'd throw in a grinning MODOK, too. And doesn't Dr Doom's iron mask deserve a moment of happiness?

Meanwhile, I can giggle at the work of Mr Land in Uncanny X-Men, wherein he draws the fearsome members of the evil Sisterhood as jolly underworld models, a veritable Legion of Lingerie. These are women who know how to kill, but more importantly, they know how to dress. And strut. And stare. Boy, do they stare, looking out at the reader with come hither eyes, challenging us to identify the original actress/model/mutant.

I know I'm not saying anything original, but the hyper-realistic but ultimately undramatic use of photo-reference acts as a ringfence for Matt Fraction's story; I find it impossible to get involved because I don't believe any of it. Everything is too perfect, too manufactured. Yes, back in the day John Romita, Sal Buscema and friends drew gorgeous people, but their lines had heart. Here the word that comes to mind is Stepford.

It's not just the villains. We also have the all-smiling, all-grinning X-Men, branded as psychotics by their Joker-like gnashers. Mind, Fraction provides his own injection of humour by revealing that Wolverine maintains a graveyard in Tokyo to remember his lost loved ones. Oooh, he has the soul of a poet, that one.

He also has a lunatic addiction to being mysterious for the sake of it - having charged Domino (from X-Force/the Nineties) with travelling to the cemetery to lay flowers, he doesn't bother telling her the nature of the graveyard, he just leaves it to her to work it out. Why? Because they're old spy pals, that's what they do.

Handily, this is the very moment when the Tart Titans decide to raid the graveyard for the body of one Kwannon, who died of convoluted continuity (I'm not kidding, Wiki her). A fight ensues and everyone looks pretty(aided by the luscious colours of Justin Ponsor).

On the North American continent, Beast and the clever clogs members of Club X are drinking coffee and trying to bring back the active X-gene; Nightcrawler is pretending to be a priest again, having had all of six months' training during a Chris Claremont continuity leap; Emma and sundry telepaths are hit by a psychic earthquake; and Wolverine is asking Northstar to join the X-Men because a gay speedster would be good for the image, the X-Men having no kind of gay following at all. Everyone grins: 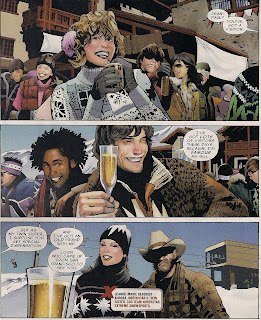 That's because they're happy - Jean-Paul is a top athlete again and finally allowed by Marvel to be queer enough to have a boyfriend. His sister (as in sibling and occasional nun) Jeanne-Marie is having a week or two off from being mad. And Logan is sizing them both up for his graveyard. It fair warms the heart.
Uncanny X-Men #508 review