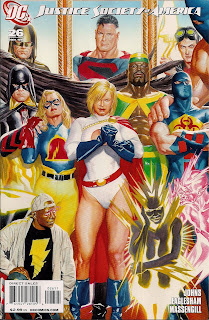 Writer Geoff Johns ends his generally commendable ten-year tenure with DC's first super-team via a pleasant Day in the Life issue. The day belongs to Stargirl - it's her belated birthday, her actual one having been spoiled by super-villainy. And she's not happy, as she makes clear at the start while leaving the Blue Valley school bus (I thought she was now at college?) in an illustration reminiscent of the classic X-Men #168 splash page featuring a rather peeved Kitty Pryde. 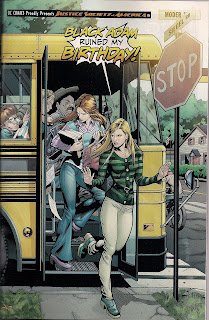 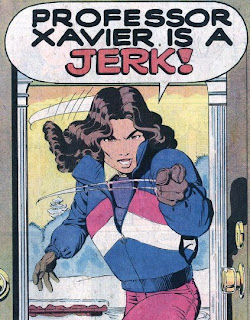 The issue is a treat for fans of the old Stars and STRIPE book as we get to see Courtney Whitmore with her mother Barbara, stepdad Pat (aka Stripesy), blended brother Mike and pal Mary (who I always thought would become a new Merry, Girl of 1000 Gimmicks - darn, wrong gain!). Court's party is the scene of lots of characterisation showing how members old and young have matured through Johns' run on this and the previous JSA book. The sentimental conceit is just the right side of self-indulgent, with the only off notes being the many gags around Starman's supposedly charming schizophrenic illness. Oh, and it seems that Stargirl no longer even tries to protect her identity, as evidenced by her allowing a batch of JSA-ers to hover around her as she goes to the dentists - that's even creepier than Jay's hair.

The also-exiting Dale Eaglesham draws up a storm as ever, though his Jay Garrick, with longer hair and more wrinkles than usual, yet still madly buff, looks a little creepy. Alex Ross provides three linked covers showing the entire team; mine is nice and colourful, but almost everyone looks eeeeevil.
Justice Society of America #26 review