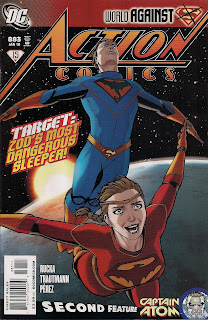 Excellent, Nightwing and Flamebird finally get some decent costumes, sleek spins on both the Superman suit and Silver Age Kryptonian wear. The cover by Cafu and Santiago Arcas shows them off nicely.

Inside they're drawn by Pere Perez and look equally good, as does the John Byrne-style Science Guild outfit of this issue's villain, another Silver Age revival, Jax-Ur. In the old days he looked like Lex Luthor, now he's the image of Dr Sivana - and a lot scarier. I'm not into stereotyping by appearance but it's amazing anyone can look at him in his secret ID as a STAR Labs scientist and not think 'evil genius'.

Jax-Ur is the creepiest Zod sleeper agent yet, looking on humans as lab rats and treating them accordingly. I rather like him and his way with the super-senses. If only he'd shut up with the Kryptonian-speak. Arabic is spoken and we get a nice editor's note introducing in-balloon translations. Kryptonian? Nah, we're still getting the whole blah-bloody-blah pointy-symbol chapter and verse.

Nightwing finally shows some proper personality, displaying a sense of humour and pride in his girlfriend. Perhaps we can credit new co-writer Eric Trautmann with that. Flamebird, too, comes alive, though she's mainly even nuttier than previously, talking about herself in the third person.

The standout character in this nice mix of superheroics and mystery is Perry White, who investigates the whereabouts of Jimmy Olsen (he apparently died in Jimmy Olsen Special #2 recently; I'm betting Mon-El faked his death to protect him from Codename Assassin). Trautmann and co-writer Greg Rucka give us the best Perry scene in years, showing him as veteran newshound rather than barking cliche of a boss.

One thing I don't get is the continued insistence of the world press on vilifying Flamebird and Nightwing. Here TV cameras capture them quite obviously ending the immediate threat of mini-Brimstones and still they're attacked by the media.

The ending of the story takes us somewhere we've been heading for awhile, and I look forward to seeing where things go from here.

In back-up land, Captain Atom fights Major Force and returns to Metropolis, where he's given a hand by a surprise figure. It's a quick read, but a worthwhile one, as we finally get away from the magic world Cap's been stuck in. Now, if only he'd stop being a passenger in his own strip. Rucka and James Robinson's script gets us in and out quickly, with Cafu and inker Bit stealing the show with a two-page spread of hero fighting villain.

This is the best issue of Action Comics in a while. Anyone know how to say that in Kryptonian?
Action Comics #883 review Greg Rucka Eric Trautmann Pere Perez James Robinson Cafu Bit