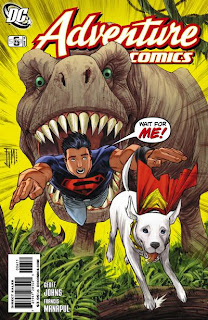 Superboy calls Lex Luthor's bluff. Sick of hearing him harp on that if it weren't for Superman he could cure cancer/feed the world/win Dancing With The Stars, Superboy tells him to prove it. Cure his crippled sister, Lena, mother of Superboy's juvie classmate Lori. And Lex agrees, if Superboy will go on a scavenger hunt through time and space.

That's the set-up for this issue, which concludes both Superboy's obsession with his 'what would Superman/Lex Luthor do?' notebook, his strip and the creative team's involvement with the character. And it's a treat from start to finish. The Superboy/Lex/Lori dynamic is fascinating, while our clone hero shows the spirit he could only have inherited from Superman. He's not as learned as Lex, but he's smart, with a heart as big as the sun. And he has Krypto the Superdog by his side, meaning a smile is never far from his face.

There are few smiles here though, as the personal stakes are high: the happiness of a classmate, the health of a sick woman and proof that Lex - donor of 50 per cent of Superboy's genetic material - has some good in him.

The outcome guarantees this is a Luthor story that will be remembered for years to come, up there with the Silver Age's Lexor stories, and the early John Byrne work. And the ending lets us know that Lex isn't finished with Superboy yet . . .

This is fine work from writer Geoff Johns and artist Francis Manapul. Their Lex looks and acts like the cold man he should be, while Superboy's alternating hope and despair is obvious. The interaction between Superboy and Lex isn't the same as that between Superman and Lex, but it's at least as fascinating. And I was kept guessing as to how the story would end. We never do find out why Lex abandoned the sister he loved, though I suspect the answer is there in the question.

The Smallville Manapul and colourist Brian Buccellato create is modern yet classic - I found myself looking at the details of Lena's home as much as the people in it; the odd mix of paintings, the mystery kitchen equipment, the scuffed floorboards . . . this artistic team is a huge asset to the strip so no matter how good their work on the upcoming Flash book, I'll be hoping for a return to Superboy.

And they'd better bring Johns with them - despite the acclaim he's getting for his Green Lantern reinvention, this is his best work in years, as he tells stories smaller in scope, but easily as complex. Instead of sprawling fight scenes involving thousands of gaily coloured Lanterns, we have mindgames centred on one or two people whose tighter focus makes for a more original story and enjoyable experience.