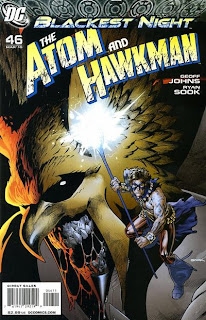 In the Sixties, the solo titles of the Atom and Hawkman were amalgamated into one comic when sales fell, with the numbering continuing from Ray Palmer's title. The book, flagged as starring 'the Titan and the Fury', limped along for another seven issues before dying out. Well, it's Blackest Night and the Dead Will Rise and all that, meaning the not-exactly waiting world gets a 46th issue.
They needn't have bothered. Writer Geoff Johns here gives us a bit of fighting between the Atom - now an Indigo Lantern - and his old mucker Hawkman, now a Black Lantern. Hawkgirl's here too and equally keen to chow down on Atom's heart, but in a Sixties revival she can't expect any sort of billing. Also present is a tiff with Atom's ex, Black Lantern Eclipso Jean Loring (phew!), in which we get to see the horrific/ridiculous death of Sue Dibny yet again. And a bunch of Indigo Lantern mumbo jumbo about powering up other Lanterns for the next stage of battle. Or something.
This isn't exactly unmissable comics, merely giving us what we've seen elsewhere in fuller, duller detail. The ending offers some hope for Hawkman and Hawkgirl, and it's fantastic to see a spirited Ray after years in which his depression has been in inverse proportion to his height. But really, this is a great opportunity to save $2.99. Don't tell me you have an Atom and Hawkman collection which simply must be completed . . .
The art's pretty darn decent. Ryan Sook obviously has fun drawing Ray Palmer back in a Sword of the Atom style costume, with mini-bling and flappy loincloth protecting Ray's privates (he's famous for his six inches, you know). And dig that Paddle of Doom he's wielding.
Fernando Pasarin, drawing the last half of the book, channels original Ray Palmer artist Gil Kane to produce some gorgeous art
- yes Virginia, there is a nostril shot. I even liked his version of Jeanclipso, and a moment which brings back the jungle shortarses from Sword of the Atom conveys a genuine evil intensity. The artist's been doing some gorgeous work as a DC pinch-hitter of late - won't somebody please do us all a favour and give him an assignment all his own? And if there's a second printing of this comic, a cover credit alongside Ryan?
So that's Atom and Hawkman 2010. You can go back to Comics Limbo now.
Atom and Hawkman #46 review Geoff Johns Ryan Sook Fernando Pasarin