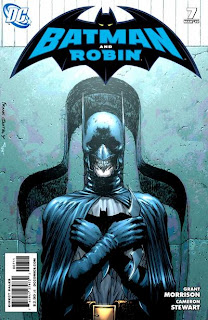 When I was a kid, reading imported comics from North America, I was often confused by the impossibly exotic things referenced. Baseball? Amtrak? Martha Stewart? Back in those pre-internet days the specifics of the mysteries often remained, though I could usually work the generalities out from the context.
And hopefully any non-British readers momentarily thrown by the wealth of British references Grant Morrison throws into this issue will still have fun (though if they get really confused, Rich Johnston has provided a helpful glossary over at the Bleeding Cool website). We join new Batman Dick Grayson in London, aided by Robin equivalent The Squire in foiling a bomb plot by the fiendish King Coal. After a trip to Britain's equivalent to all those American super-prisons, the Orwellian-sounding Basement 101, we find out what Dick's doing in the UK - bidding to raise Bruce Wayne from the dead via one of the Lazarus Pits so beloved of criminal dullard Ra's al-Ghul. Subplot-wise, there's a domino or 28 present, linking back to an earlier storyline, and the recently injured (ha ha) Damian being immersed in one of those self-same pits by Mother of the Year Talia.

This is a great ride, beginning with a classic chase scene through London and ending with grim portents in the English countryside. The interplay between Batman and the Squire - an amalgamation of Robin and British comic characters Minnie the Minx and Beryl the Peril - is entertaining, though her boss, the Knight, is a little dull. To be fair, he doesn't get to strut his stuff; it'd help if he got rid of the hideous Prometheus-style outfit. Also on hand is Batwoman who, amusingly, is forever being almost sacrificed by cultists from The Religion of  Lame.

Australian Canadian (sorry!) artist Cameron Stewart captures London wonderfully - there's not a medieval hamlet or 1930s bobby in sight - and I took to his Batman straight away. He's very Bronze Age to look at as he bounds around, more suburban than gothic, and it suits the pairing with the Squire, whose garish costume pretty much defines 'dog's dinner'. The panels are expressive, with excellent use of lighting. The only storytelling issue here comes when a couple of word balloons are transposed, but it's something you can easily work through.

With references to such UK villains as Dai Laffin (presumably a Welsh Joker) and the Morris Men, I'm now itching for Grant Morrison to write a mini series set in the UK. Given the amount of money readers over here put into DC, it's be spiffing to have something targeted at us.
Batman and Robin #7 review Grant Morrison Cameron Stewart