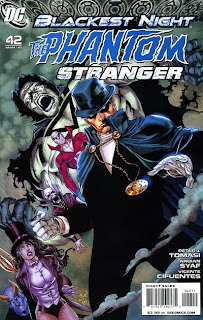 Last week, in The Power of Shazam, we saw that minor super-person Osiris was able to overcome the Black Lantern influence due to the magic within him. This week, in The Phantom Stranger #42 (not really), we see that the most powerful magical presence in the DC Universe, the Spectre, can't say the same thing. Work that one out.

Nope, despite the entreaties of the Phantom Stranger, and hellfire blasts of Blue Devil, the Spectre is unable to expel the Black Lantern energy. So off the naughty, haughty Spectre goes to judge Hal Jordan. Or something. The rest of the book sees our mystical heroes trying to connect the missing Deadman with his mortal remains. It seems Boston Brand's body and soul must both be in the Shangri-La-La Land of Nanda Parbat for some upcoming Big Shiny Moment.

Could be a clue to the end of the Blackest Night crossover and start of the Brightest Day stunt. Or it could be one of those bits of nonsense we're tossed in one-shots to make them seen relevant that DC knows we'll have forgotten by the time an alleged conclusion arrives.

We'll know soon enough. Meanwhile, this is a decently dopey mystical adventure, with the Phantom Stranger being his usual useful, but always irritating, self; he gives the other characters enough hints to get them to bend to his admittedly benevolent will, but never drops the Man of Mystery bullshit long enough to put his purported partners in the picture. Blue Devil and Deadman are always fun, though having them in the same story is a bit risky as they share the same personality, and Ben Grimm needs it back.

There's an odd moment in which Deadman starts wittering on about Ben and Jerry ice cream. Do they have product placement in the afterlife or is Peter 'Story and Words' Tomasi getting the odd free tub? I did get a fanboy kick from the visual reference to the four possible beginnings of the Phantom Stranger suggested in a Secret Origins issue back in the last millennium, though it must have meant nothing to the majority of readers. And I liked the minor meditation on the power of masks and totems.