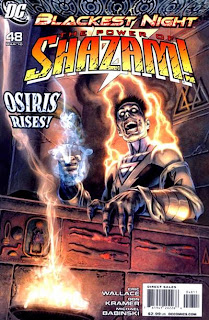 Billy Batson, sister Mary and pal Freddy Freeman shared The Power of Shazam! for almost 50 issues in the 1990s in a thoroughly entertaining, thoughtful superhero comic book. The writer and cover artist was Jerry Ordway, currently back doing some great work for DC, so the prospect of a coda issue courtesy of the Blackest Night event had me licking my lips.

Well, that was wasted saliva. Ordway is back with a painted cover that's typically attractive, even though it does feature a corpse. And that's the crux of my complaint. Except for seven panels featuring Billy and Mary, this comic is all about Amon Tomaz. Who? Osiris, a shortlived member of the Black Adam family from the pages of weekly comic 52. Given that he was created by Adam during his brief attempt to be a hero, it's unsurprising Osiris wanted to do good, which he did as a Teen Titan . . . for about three minutes.

But he was suckered by man-croc Sobek, snacked on and placed in a nice tomb, which is where we find him at the start of this issue. Sobek's also back, like Amon he's gifted a Black Lantern ring and they use their extra time in very different, yet predictable, ways. Yup, they fight a bit.

Eric Wallace provides a decent script, for what seems to be very much an assignment rather than a passion project - he gets us in, he gets us out, beats are hit in a professional manner, but there's little sense Wallace burned to write about this nice but dim second cousin of the Marvel Family. The very capable Don Kramer pencils and his work looks grainier than usual, teamed with the inks of Michael Babinski and colours of JD Smith. I enjoyed it, bar one of those particularly gruesome moments so popular with DC over the last few years. Rob Leigh letters, handling the white-out-of-black zombiefied captions and pointy brackets that tell us characters aren't speaking English which, given said dialogue accounts for the vast majority of the book, doesn't seem all that necessary. Still, at least I'm not having to deal with sodding Kryptonian (sorry, it's an Action Comics week and I get testy).

But the quality on display is scant consolation to the reader, who likely bought this book hoping for some Marvel Family action. It's not an unfair assumption, DC having put out this solicitation:

THE POWER OF SHAZAM! #48
Written by Eric Wallace
Art by Don Kramer & Michael Babinski
Cover by Tom Feister
BLACKEST NIGHT infects the Black Adam family when Osiris returns from the dead as a Black Lantern to terrorize young Billy and Mary Batson! Now powerless after the wizard Shazam deemed them unworthy in JUSTICE SOCIETY OF AMERICA #25, can the Batsons even count on the aid of Freddy Freeman, the new Captain Marvel? Find out in another of this month's one-issue revivals of classic DC Universe titles!

Well, Black Lantern Osiris is in there.

I suppose we should be grateful for even a sighting of the Batsons
- they spot Osiris on TV and note that they can't help if he goes on a Black Lantern rampage - as poor Freddy doesn't get so much as a panel. Too busy crying for justice with Hal Jordan's Justice League, I suppose.

The pay-off to the issue is as you'd expect given that we're shown The Power of Black Adam helps Osiris resist Black Lantern conditioning, but satisfying so far as it goes. I just find it hard to believe Osiris has any fans clamouring for one last look at the sad sap. Certainly he doesn't have more fans than the Marvel Family. The Power of Shazam? More like an outage.
Blackest Night: The Power of Shazam Don Kramer Eric Wallace Michael Babinski Osiris Tom Feister