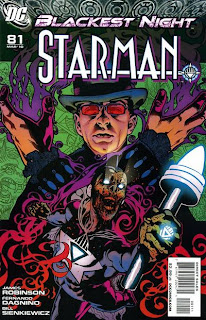 One comic. One single, slim book. That's all it takes to make the Blackest Night crossover worthwhile, and have me grinning from ear
to ear.

Starman was one of the greatest comic runs of the Nineties, a story in which the human dramas were as grand and memorable as the cosmic and supernatural struggles. And it's that humanity which is central to writer James Robinson's return to Opal City. His central character, Jack Knight, isn't here, which is as it should be; his time in the spotlight ended in a thoroughly satisfying manner and he's quietly raising his baby in San Francisco.

But as anyone who ever read an issue of Starman knows, while Jack was the title character, he was supported by an unforgettable ensemble, any one of whom could carry the book for an issue or two. And some of them did.

And many of them are here, most notably the morally ambiguous Shade and the fiesty Hope O'Dare, only woman among a family of cops. And Opal, as much a character as the human protaganists, is present in all its art deco glory. And Lord, have I missed it, and its marvellously complicated inhabitants. There are no minor characters in a Starman book - when someone gets panel time, they're treated as a lead, with hopes and dreams made evident by Robinson and his artistic collaborators. Original series illustrator Tony Harris contributes a typically attractive cover, but handling the intricate, fascinating interiors are Fernando Dagnino on layouts and Bill Sienkiewicz on mood.

Sienkiewicz has such a strong signature that it's easy to assign him all the credit here, but Dagnino provides the spell book from which Sienkiewicz weaves his magic. I'd love to see more of the artistic team that produces panels such as this (click to enlarge). 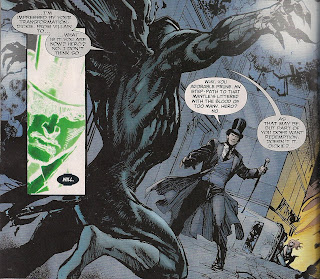 The dialogue shows that Robinson can go home again, as he brings his cast to life with pithy, personality-filled exchanges. One sees a cop at the Starman Museum - its walls providing a memory jogger for old readers, temptation for new - tellingly refer to Jack's brother David as 'Ted's son, the one who wasn't Jack'.

David, the Starman heir murdered early in his superheroic career, is the Black Lantern here, providing the template for the dark beast bringing death to the streets of Opal. He makes a far better demon than he ever did a good guy, efficiently eviscerating everyone he runs into as a prelude to his planned killing of Jack. And while Jack's not around, his friends rally to take on 'David', foremost among them the Shade.

Based on his showing here I've no doubt that the Shade could carry an Opal-set series, filled with the rest of the Starman cast and the new characters Robinson would be sure to invent. Robinson has said he's open to at least a special starring the immortal master of darkness. I'm hoping he had as much enjoyment writing this book as I did reading it. My immediate reaction is to dig out my Starman run; my longer term hope is a permanent invitation to revisit Opal. Starman may be gone, but his light shines on.
Blackest Night: Starman #81 review James Robinson Fernando Dagnino Bill Sienkiewicz Tony Harris