The Brave and the Bold #31 review 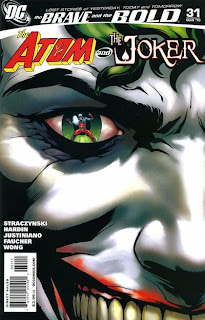 'Lost stories of yesterday, today and tomorrow' is the tagline for J Michael Straczynski's current run on The Brave and the Bold. You could put it another way: 'Fun without baggage' That's what we get this month, behind a superb Jesus Saiz cover, as Ray Palmer does the Fantastic Voyage thing to save the Joker's life when he descends into a killer coma.

Because the story is set at some unnamed point in DC's past the Atom isn't miserable because a) Love number one has left him; b) Love number two has been trodden on by loggers c) Love number one has gone crazy, murdered a friend and been possessed by an immortal demon; d) He's crying for JUSTICE and going up the noses of thugs. Nope, here we have Ray doing the superhero thing with a smile on his face, miles away from any personal problems.

Although he does go up a nose.

But why might the Mighty Mite help the Joker? That's what he's asking himself when Arkham Asylum medics explain that their Hippocratic Oath means they have to at least try to save his life. We know that as a hero the Atom is as morally bound as the doctors to do what he can, but his internal dialogue before that is amusing. What follows is an offbeat pairing that provides as much insight into the Joker as the Atom, and delivers a killer ending.

Three cheers to JMS for showing that Ray Palmer is more than just a punching bag to plug into overwrought 'drama', a conveniently homeless comic book character to kick about. He's a smart guy worthy of attention for himself, a hero who moves in unique circles, as we're shown here via organically placed nuggets of science worthy of the Silver Age. But the story is very today, with its interest in character as much as action.

As for Ray's co-star, I get almost as sick of seeing the Joker as I do Deathstroke, Ra's al-Ghul and Lex Luthor, yet this was totally my cup of tea, as JMS finds a new way to use the Clown Prince of Overexposure's madness.

There are two artists this issue, divided along lines that make perfect sense for the story. Chad Hardin, pencilling the real world sequences, is very Bronze Age, Alex Saviuk crossed with Luke (mental block about drawing spectacles) McDonnell. Looking at Chad's blog, he's an adaptable fellow, so I assume the clear, dynamic style is deliberate. Credit, too, to inker Wayne Faucher, or perhaps Walden Wong - they're both in here, along with singular sensation Trish Mulvilhill, handling the hues. Justiniano pencils the sequences inside Joker's head, bringing a wild intensity to the book and providing a standout splash . . .

. . . which you'll have noticed I'm not spoiling - this book is well worth your time, as a whip-smart, original, well-crafted piece of work. Support a classic Atom tale and do yourelf no small favour.
The Brave and the Bold #31 review J Michael Straczynski Chad Hardin Jininiano