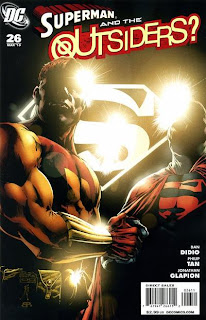 Today the Scottish Parliament published the End of Life Assistance (Scotland) Bill, which would make it legal for doctors to help the terminally ill die at a time of their choosing.

Today this blog publishes the End of Useless Comic (Outsiders) Review, which implores that this terminally tragic book be put out of its misery.

Outsiders #26 is meant to be a new start, the new direction that will stabilise a comic that never found its feet, despite getting two #1 issues in seven years and about a dozen new directions. The last one, just a year ago, saw the team organised by Alfred the Bat-butler to round up Arkham Asylum escapees. Alfred was soon pulled away again by some silver polish emergency or other, but the team kept chasing the Gotham crazies until last issue, when a Blackest Night cliffhanger pulled Halo away and an epilogue showed Geo Force having returned to his homeland of Markovia.

Which is where we join him this month, having a little breakdown in his Mittle European castle and threatening Owlman for daring to notice. Geo, sorry, Emo Force finally tells Owlman that he's sent Katana and Black Lightning on a mission.

When we join them, fighting pirates on the high seas, Katana is treating Black Lightning as obnoxiously as Geo Force treated Owlman. Black Lightning, outrageously, would prefer her not to murder criminals with her bloody great sword. Nevertheless, she slays at least one and tries to off another.

Metamorpho, meanwhile, is in a 'capital city' (psst DC, it's called Markovburg) cafe, being a total dick to Jack Ryder - the Creeper in his other form - because he actually wonders out loud what they're doing in Markovia.

As do I; Metamorpho and Katana are on side with Geo Force, whereas Owlman, Black Lightning and Creeper are out of the loop. Now how does that happen? How does a team move to another country without a discussion? Why is anyone kowtowing to the obviously deranged Geo Force, rather than staging an intervention? Where is Halo and why does no one mention her (I suspect a Noble Sacrifice in an upcoming Blackest Night; she's better off out of it, having spent the last year of this book as DC's answer to the Invisible Girl)?

And what the heck was editor Michael Siglain doing when this book was in production? I don't doubt that when your boss is the new writer, it pays to be diplomatic, but there are ways of conveying diplomatically that a story isn't working. That in the first issue of a new direction it might be a good idea to introduce your characters and their abilities, to not assume readers are intimately familiar with their backstories. Even longtime readers, for example, might have missed 2008's DC Universe Last Will and Testament, in which Geo-Force gained the physical and mental scars on which this issue's opening scene pivots. Those who did read it will have tried to forget.

And as a British reader, I have to say that I find it tiresome that every time we see a European man in comics, he has a stick up his metrosexual arse. And lives in a 12th century hamlet. Wearing ermine. Honestly, we have genetically engineered sheep and everything these days.

Here Geo-Force seems to be playing Dr Doom, but where he recently offered sanctuary to Asgardians, Prince Brion is inviting in the New Kryptonians. Yes, having spent a year tagged on to a Batman storyline, this book is now grabbing the coattails of a story that's already been going on for a year in four other DC books. Oi, Outsiders!How about actually not worrying about a Big Concept, and just having a few self-contained good vs evil stories showing these characters acting like adults? Letting the book grow organically, rather than throwing stunts at it and hoping something sticks.

DC has trumpeted this issue as the start of the Dan DiDio/Philip Tan team, but the artist, despite sole penciller credit on the cover, shares duties with Don Kramer. Luckily, Don Kramer is talented, and both illustrators - with inkers Jonathan Glapion, Michael Babinski and the excellent colourist Brian Reber - produce some good, moody work. OK, there is the small matter that no one seems to have bothered to check out what Owlman looks like without his mask, but if we're having new personalities - the formerly assertive Owlman is reduced to startled Bambi here - we might as well have new faces. And the splash panel reveal of the villain, a new version of Seventies nobody Captain Fear, is awfully underwhelming. But overall, the artwork is decent comic book fare.

I'm sighing heavily as I write this, and it's only fair to say, Outsiders, I'm out. This book has had enough chances. Let it die a dignified death before the inevitably falling sales make its demise even more painful.
Outsiders #26 review Dan DiDio Philip Tan Don Kramer