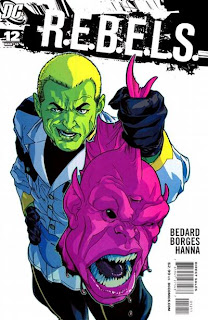 Starro the Conqueror. Kanjar Ro. Despero. This comic has become something of a home for Silver Age Justice League villains. But it's no rest home, as all three are at the forefront of a galaxy-spanning storyline, alongside Vril Dox and members of his former L.E.G.I.O.N. law enforcement agency, the Omega Men and Adam Strange.

The big threat is Starro who, it turns out, isn't just a big dopey starfish, he's a master planner with the blood-spattered body of a barbarian. His humongous mental powers have allowed him to enslave planet after planet for thousands of years, via face-sticking starfish that take away free will. Dox and co are determined to take him down. It's not easy - one year into this book and it's only now there's a chink of real hope - but it's entertaining. The past 12 months have seen Dox (now styled Brainiac 2 in case the green skin, blond hair, massive mind and bigger arrogance isn't pointer enough to his parentage) gather a team with the skills and spirit to take back the galaxy. It's been non-stop incident, never venturing near Planet Boring; if anything, I'd welcome the odd breather for some sheer soap.

But what I'm getting is a terrifically exciting, densely plotted and richly characterised cosmic superhero comic. This month we have Starro fighting Black Lanterns and finding Dox's even smarter son, Lyrl, useful but annoying; Dox looking to cross a doomsday gong with a gene bomb; and the Omega Men coming up with their own anti-Starro plan.

Dox was one of the best new characters to emerge from the Eighties, alongside the Suicide Squad's similarly manipulative Amanda Waller, and it's great to see both getting some regular play after years in the wilderness. There is a new wrinkle added to Dox here, though. Back in the days of L.E.G.I.O.N and the original R.E.B.E.L.S. he was presented as a bastard, but a bastard who believed in what was right. A suggestion this issue is that he's not as far removed from the likes of the despotic Despero as we believed.

Given the immense nature of the current crisis it's understandable his associates are following Dox almost without question - he's the man for the job. Once things settle, though, I hope that we'll see other personalities rise up to match his, and challenge him, as the likes of Phase, Stealth and current member Captain Comet did in their L.E.G.I.O.N. days.

Writer Tony Bedard has charts. I'm sure of it. Paul Levitz, in his heyday as Legion of Super-Heroes writer, had charts keeping track of his crisscrossing storylines and characters as the best way to track a huge cast in an ambitious series. And I think Tony has similar spreadsheets. Elsewise how could he keep a book this busy on track
- unless he's a member of the Brainiac family himself?

He certainly shares one writing tool with Levitz's Eighties LSH, the regular use of Hitchikers Guide to the Galaxy style infobites to bring us up to date on locations and situations, while the character tags used by more recent LSH writers are also deployed, to introduce characters succinctly and stylishly.

Because of this, I guess an intelligent soul could jump on this book midstream and pick up on the action. It'd be better if they didn't have to leap blindly, though. This month's first R.E.B.E.L.S. collection, which contains the first six issues of the book, will go some way to providing a better experience, but it's a shame the next volume isn't due until August. Surely by now DC could be collecting books every six or seven months?

Never mind, I'm all right Jack and all that. Especially with the art of series regulars Andy Clark and Claude St Aubin, and this month's penciller, Geraldo Borges. Like his predecessors, Borges shows a facility for alien races - whether they're scary or cuddly, they look brilliant and we can recognise their emotions.

Regular inker Scott Hanna also deserve a lot of credit, especially for the delicate way he finishes Dox's face, giving him a benevolent Paul Newman quality that belies his methods (in one incident he destroyed a naive young girl's body to bestow on her the power set he needed, without bothering to so much as warn her, never mind ask permission). Jose Villarrubia somehow keeps all the colour schemes from clashing while finding other hues for backgrounds and props, and Travis Lanham letters with pizzazz.

Editors Brian Cunningham and Rex Ogle have put together a great monthly and with luck the recent Blackest Night crossovers, which Tony seamlessly integrated with his ongoing story, will pull in the new readers R.E.B.E.L.S. needs to survive and prosper. And if it takes Starro drones on the faces of a few thousand comics fans, so be it.

R.E.B.E.L.S. The Coming of Starro is out on January 26 and no, I'm not getting paid for this, darn.
R.E.B.E.L.S. 12 review Tony Bedard Geraldo Borges Scott Hanna Jose Villarrubia Travis Lanham Brian Cunningham Rex Ogle