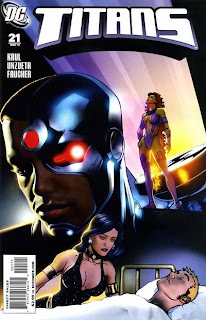 Well this is annoying. After a run that never really found its feet - to be polite - Titans gets good just as the book is effectively being cancelled. With Starfire, Wonder Girl, Batman and Cyborg heading for the JLA, Raven and Beast Boy back with the Teen Titans and Flash sidelining himself after the return of Barry Allen, there are no Titans left and DC is handing the book over to Deathstroke the Tiresome, making this first of two parts my penultimate issue.

So it's bittersweet that wind-up writer JT Krul shows one of the best understandings of the members and how they relate to one another than any writer has for years. His handling of the Kory/Dick relationship, for one, is superb. Ever since they failed to get married and Dick began sniffing around Barbara Gordon (again) and Huntress, they've been awkward around one another. Not here. Here Starfire and the new Batman demonstrate the intimacy of ex-lovers, friends and team-mates. They know and trust one another in a way that actually has me yearning for them to get back together.

Kory and Victor, too, demonstrate the length and nature of their friendship as they discuss Vixen's recent offer to Starfire to sign up with the JLA. Cyborg wants to keep the Titans going, but he's not going to dissuade her from a path she should at least investigate.

Mind, this issue does feature, oh, let's call her Downer Troy, telling anyone who'll listen that the loss of a limb over in Justice League: Cry for Justice means Red Arrow's life is over. Forget his lovely, smart daughter*, the fact that the heroic community will be able to whip him up a self-loading blender or something, and that he's a born fighter, the guy's doomed. Doomed! This attitude is so wrong for Donna it's not true - she's the most optimistic of heroes - but I'm not blaming Krul. The subplot smacks of being editorially imposed; Donna is helping to make the case for Roy's descent into God knows what in a series of stories Krul is writing later this year.

So while I don't like this Donna, I can ignore her until the real one - hopefully - shows up in JLA. And there is some more acceptable Donna characterisation here as she discusses her own tragedies.

As with Donna, Wally is a bit rubbish in a way that's entirely down to the restructuring of the DC line, telling Victor he can't commit to the Titans as he has so much to learn from just-back Uncle Barry. Pshaw, I say! At this stage he's had years more experience of super-speed fighting and the Speed Force than his Flash predecessor, and could surely teach him a thing or two. He's already shown Barry how to change his costume via speed energy. Which is nice.

This issue also features a classically attired Black Canary reminding us what she means to Roy, some deliberately anaemic villains and the return of a favourite Titans foe.

And it's all very pleasantly drawn by Angel Unzueta and Chris Batista, inked by Wayne Faucher, coloured by Hi-Fi Design and lettered by Travis Lanham. Worthy of special mention are the Gotham scenes (Batista, I think), with Kory shining against the dark knight, and terrific body language livening up the visuals during the long chat with Dick.

Even the cover is spiffy, with Unzueta resisting the urge to homage any classic 'Titans unTogether' illos in order to provide a moody montage.

It's fine work all round. If the book does a Birds of Prey and comes back in a year or so, DC, could you try this creative team full-time, please?

* Oh, turns out she's dead - it's rather cleverly implied here via dialogue and image, and I missed it. Oops, bye Lian.
Titans #21 review