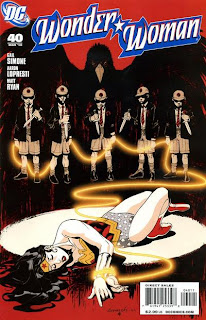 This one, as they say, has it all - giant serpent gods, Washington DC in flames, the return of Etta Candy and Steve Trevor, a surprise guest star and five very naughty boys.

The story sees Diana investigating when something big and mysterious swallows a subway train. Being tougher than a serpent's tooth, she soon sends one very hungry god packing, but not before he tells Diana that something outside of himself compelled him to go human hunting. The rest of the issue has Diana visit her best buddy Etta - hospitalised in one of Diana's recent battles - as five mysterious boys sow violent discord in Washington DC.

This is far and away my favourite issue of this book since the creative team of Gail Simone and Aaron Lopresti debuted a couple of years ago, and there have been some great ones. The Wonder Woman presented here is strong, smart, likeable and loyal, someone I'd want to spend time with. While she's confident in battle, the Aztec god Quetzlotl registers as a threat to her and he's certainly a character I'd like to see again - he adds a new flavour to DC's godly pantheon.

The scenes with Etta and Steve are something I've been awaiting for several months as packed storylines kept Diana away from Etta's bedside and, credit where it's due, she feels guilty for that here. Etta's also feeling uncomfortable, for a secret she's been keeping from Diana, and it's something that increases Etta's status in the DC Universe. Don't worry, she's not ascending to godhood or taking over a ninja sect, it makes perfect sense for the character and world.

Our cover boys, the Crows, are adorable - in a bad way, mooching around Washington, spreading hate, while looking like little angels. While their powers are formidable - they're influencing mortals and gods here - what makes them immediately compelling is their ever-so-proper speech patterns, and the way they relate to one another. The children of the war god Ares and some now-departed Amazons, they've only been alive a month or two, but here, in their first real appearance, it's as if they've been in comics for years; they're an assured bunch. By issue's end they've turned another hero against Diana, but you can bet they'll team up and knock the brats' heads together next month.

With their flashing eyes and mental push powers, the obvious comparison here is with John Wyndham's Midwich Cuckoos, the filmic Children of the Damned. But devil kids have been around as long as literature, and glowing orbs are a common comics shorthand for psionics. I'll take the Crows for what they are - a credible menace to Diana ranking with the too-long-gone Devastation who is, I suppose, their cousin or great aunt or something . . . who can work out Olympian family trees?

Gail's storytelling is on top form here. She establishes characters and situations with economy and vim, and paces the drama so that whether it's battle or conversation, there's always something to intrigue. Diana's narration is delightful, especially her ruminations on the ways of Aztec gods. It's also good to see some of her more obscure abilities here, such as the tracking powers gifted by the goddess of the hunt, and super-hearing that allows her to recognise the sound of her special guest hero.

The marriage of Steve Trevor and Etta Candy never sat well with me, it seemed more a way to get Steve off the table as a potential love interest for Diana than an organic development. But here we see real chemistry between the two, in words and pictures. We also see a touchingly real friendship with Diana.

Aaron Lopresti's pencils are just, well, wonderful. The big moments are suitably splashy but he's also a great details guy, showing us the way Diana's boots bend as she walks, or the fluff on Etta's slippers or . . . oh dear, I'm coming across like a foot fetishist. Anyway. Aaron certainly draws great kids, important here not just for the debut of the Crows but for a couple of Sugar & Spike-style children who play a small but significant role (the boy gets my favourite line in an issue full of quotables). This is Lopresti's final issue, as he departs for other DC assignments. He'll be missed - he and Gail have been gelling superbly of late.

Artistic partners Matt Ryan (inks) and Brad Anderson (colours) also deserve a shout-out for their embellishing roles throughout the issue. You see all three artists work together brilliantly early on, as Diana faces an oncoming subway train. And Travis Lanham letters as elegantly as ever, picking just the right spooky font for a rampaging Aztec godling. Whichever member of the creative team came up with the signature on Etta's plaster cast hinting that no-longer-a-regular Nemesis is at least keeping in touch, thank you! The book is topped off with a striking cover by Lopresti and the mysterious *. Must be French. The image of the kids, ready to gut Diana, speaks volumes for where this storyline might go.

This is the best issue of Wonder Woman since, well, last month, which I also loved. But I love this one more. 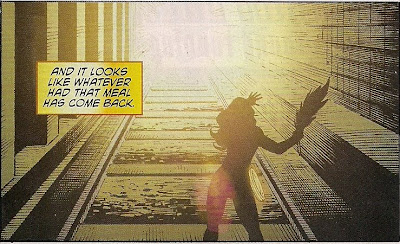