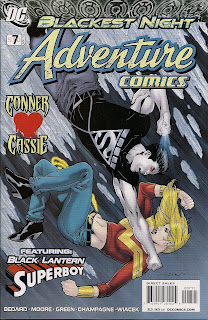 'What did Black Lantern Superboy do?' That's this issue's title, one reflecting the Geoff Johns/Francis Manapul/Brian Buccellato serial that's run through Adventure Comics since its revival last year. Because 'What would Superman do?' is the question Conner Kent finally answered to his satisfaction last month.

But what would Black Lantern Superboy do? Click to enlarge and hold back your lunch . . .

A round of applause! What took Superboy months to get right, Black Lantern Superboy manages in about two minutes flat. 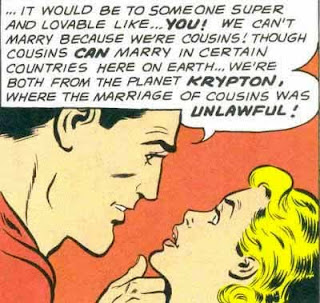 Superman would lust after his cute 15-year-old cousin. The idea scarred a generation, but that's not the point - it's what Superman did back in the Silver Age; once he almost married a Supergirl double, Luma Lynai, and he even kissed Kara after persuading her to 'help' him by disguising herself as 'Mighty Maid'. And now it's what Black Lantern Superboy did too! You go, Dead Boy!

The deal here is that Superboy, possessed by death god Nekron's Black Lantern ring, doesn't just want to win Wonder Girl's heart, he wants to rip it out of her chest. But the situation brings out the best of him; he doesn't stop fighting the evil for a moment. Tony Bedard writes this issue and a fantastic job he does too. He uses the Blackest Night crossover to finish off Superboy's physical development, having him gain the final super-ability Superman has that he hadn't. And while Superboy can't expel the dark influence, he's mentally strong enough to exert enough momentary flashes of control to start weighing the scales in his favour.

Bedard also addresses a plot point that's hung around since Johns brought Superboy back from the dead in the 31st century future of the Legion of Super-Heroes - the status of his corpse in the 21st century. And he shows the many Wonder Girl haters out there that Cassandra Sandsmark has the brains and character to fight alongside DC's best.

She and Conner are certainly perfect for one another, there's a courage in their love that helps win the day. Their ace in the hole is based on previous experiences and it's not a deus ex machina, it's something that makes perfect sense - of course they'd do this! Conner and Cassie are aided by the other love of Superboy's life, Krypto. And so what if he's a Black Lantern, Superboy's pride in his super pooch is a joy to behold.

Travis Moore pencils and while the finish is inconsistent - he has three inkers - the storytelling never suffers. It's a pacey performance, full of energy and heart. There are a fair few memorable panels here, but none moreso than a clever shot of Lex Luthor as that old devil moon. The aforementioned inkers are Dan Green, Keith Champagne and Bob Wiacek, ensuring that even though succeeding sequences don't mesh exactly, they always look good. Colourist Buccellato, the only Adventure Comics regular here, squeezes all the emotion and action of of the script with his choice of hues.

Topping off the issue is a beautiful cover by Aaron Lopresti which has me hoping he gets to draw a Conner/Cassie special one day - they look terrific together. Even if one is a Black Lantern.
Adventure Comics #7 review Tony Bedard Travis Moore Brian Buccellato Bob Wiacek Dan Green Keith Champagne