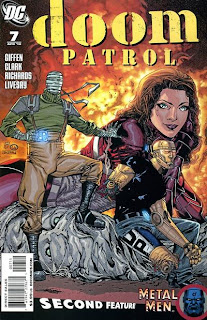 This is one of those comic books in which the stars of the show hardly appear, but you're having such a good time it's barely noticeable. So Robotman, Elasti-Woman and Negative Man are off panel until the final page of the story, recovering from the events of Blackest Night and awaiting transport home. This leaves room for housekeeping of the decidedly non-mundane kind. Writer Keith Giffen catches us up with existing supporting characters, reintroduces old friends and villains from previous DP runs, and brings in an old Justice League International member in a new role and a decidedly dodgy wig.

Crazy Jane! Wow. Never thought I'd see her again. I can't see her becoming a regular but I can't wait to see what she does become, what with 64 personalities to choose from. Oberon shows up to move some DP souvenirs/doomsday weapons from Dayton Manor, including a painting strongly associated with the capital of France. And former DP financier Thayer Jost seems to be gathering an anti-Doom Patrol (the Hopeful Patrol?), whose members include a favourite from the team's original run in the Silver Age.

There's set-up aplenty for future issues but it's as entertaining as most comics' main events. And while there are characters and elements here from at least four Doom Patrol runs, Justice League, the Challengers of the Unknown, 52 and Wonder Woman, no prior knowledge is needed. Giffen either introduces folks via well-woven infobites or makes their role clear via dialogue. If you know some of the background, the tapestry is richer; if not, it's irrelevant.

Regular penciller Matthew Clark is here spotted by Cliff Richard and each gives us dynamic, expressive work, while ever-sharp inker John Livesay maintains the tone. Between them the trio make the quiet scenes as engrossing as the action sequences, and even provide creepy moments recalling the Grant Morrison/Richard Case run.

The Metal Men are also in this issue, in what is, sadly, their last appearance for now. I'm miserable, as their strip has proven a unique addition to the line of DC superstars, with writers Giffen and JM DeMatteis, penciller Kevin Maguire and the rest of the creative team on heart-gladdening form. Of course, they're segueing into the upcoming Justice League International revival (betcha Oberon shows up there too), but I'm greedy, I want their Metal Men. Heavy sighs.

And heavy size, as Wonder Woman adversary Giganta shows up to fight our robotic heroes, and makes a right tit of herself. 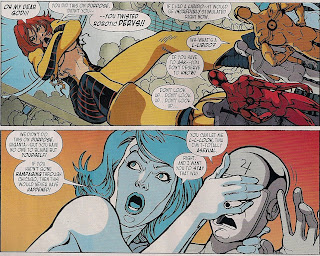 A left one too, for that matter . . . as cheap gags go, I'll take one as well executed as Giganta's wardrobe malfunction anytime. The story here also concludes the Douglas, Robot Hunter subplot in fine style, and sees Doc Magnus take on a lab assistant with Universal appeal.

At the very least I hope DC has the creative team offer up the occasion Metal Men Special - the strip's based in science but it's pure magic.

I realise I harp on about how great Doom Patrol is, but it's not a bestseller and I don't want to see work of this quality disappear from the shops. If you've not tried it yet, give it a crack - I'd love to know what you think.
Cliff Richard Doom Patrol JM DeMatteis John Livesay Keith Giffen Kevin Maguire Matthew Clark