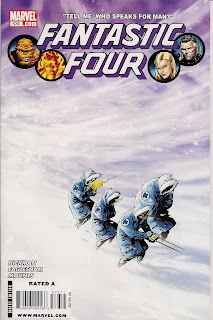 The Fantastic Four battle the soldier scientists of A.I.M. when both discover a new undersea realm. That's the basics of this issue's story, the second of writer Jonathan Hickman's Prime Elements four-parter. The specifics left me with mixed feelings.

I enjoyed the first third of the book hugely, as Sue sets up the mission and there's some economical character work
- in 'worth the price of admission' terms, Johnny Storm's Antarctic exploration outfit/coming out statement is a joy (click to enlarge). 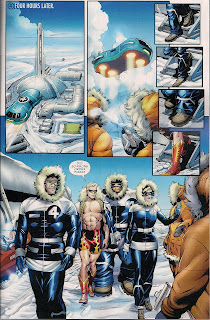 Once our family of superhuman explorers descend into the old icy depths, though, the issue loses something for me. The problem is, environmental considerations mean communications in the undersea exploration suits provided by scientists at Vostok Station can't be used. Time being of the essence, it seems Reed - fastest boffin alive - can't rig something up (this is an assumption on my part, we're simply told the comms won't work). Anyway, a nice point arising from this is Sue's confidence that her team don't need no damn comms, they know one another and will be able to communicate just fine.

And this leads to an interesting creative challenge for penciller Dale Eaglesham, who must get the story across to the reader as Jonathan ignores such useful comics storytelling tools as narrative boxes or thought balloons. Cue 12pp of extremely attractive artwork which sees the FF encounter some cute alien fishies, A.I.M. and three humanoid marine races.

I'm ruddy useless with the silent stuff, but I got the big picture, and I'm fairly sure the details of the panel-to-panel progression didn't escape me. But don't do that again, chaps, it's a tad tough on my pea brain. More seriously, I love it when your FF are interacting - the family dynamic is still there sans sound, but it's not half so engaging; I want to hear the banter, the science, even the occasional tiff.

The last few pages see the sound turned back on, as Sue volunteers to be Voice of Man in order to speak to the newly discovered Old Kings of Atlantis. 'You know why it has to be me, Reed,' says Sue. Wish I did . . . is it because Johnny's a bit of an airhead, Ben is Mr Gruff and Reed too high-falutin'? Prince Namor of Atlantis tried to make Sue his wetted wife a few times, so perhaps a regent's role is the only thing that will allow her to sit around the table when the Sub-Mariner meets his fellow rulers, and keep the peace. Hopefully this story point will be made clear.

The chapter closes - like last issue, which saw a hidden city of the High Evolutionary emerge - with a page of notes telling us what happened next. It's the sort of thing that wouldn't necessarily make dynamic comics while taking up a fair few pages if spelled out, but darn it, this is comics; if the info is important it should be dramatised with as much economy as possible. Even if the page used here were filled with, say, six panels and some narrative boxes, we'd have some artwork to look at beyond the kind of faux computer graphic Keith Giffen was giving us 20 years ago.

Still, this run is showing great promise, and providing enough inspirational moments to keep me reading, and optimistic. Jonathan has plenty of ideas, a fine grasp of plotting and isn't above giving us pratfalls, while Dale's FF is an appealing blend of John Buscema and Alan Davis stylings, and he's showing great talent when it come to imagining new worlds - a must for an heir to Jack Kirby. What's more, he gives Reed and Sue the Best Bums in Comics. 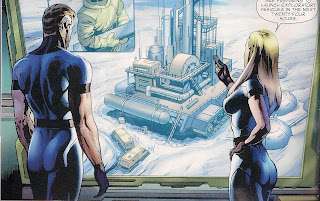 One of the reasons the artwork looks so great is the colouring of Paul Mounts, who's been a member of the FF creative team for longer than I can remember. His work is bright, beautiful and he gives Reed the most wonderfully hazel eyes. And Rus Wooton's letters don't call attention to themselves, they 'merely' do the job (wonder if he had to take a pay cut this issue?).

So that's two issues down, two to go. I look forward to seeing how these self-contained stories feed into the bigger picture. With luck we'll have a memorable FF sequence. Meanwhile, can we have 'world's greatest comics magazine' strap by the cover logo? It's a great reminder of what FF creative teams should aspire to and, well, just a fun boast.
Fantastic Four #576 review Jonathan Hickman Dale Eaglesham Paul Mounts Rus Wooton