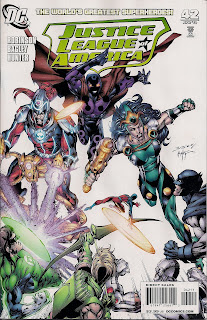 Well, that was quick. Last issue wasn't my favourite, but I was optimistic that writer James Robinson would soon get into his stride. But this is very soon
- only the second issue of JLA with the new team presenting the new team and I thoroughly enjoyed it.

There's the fresh League, smiling as they fight; more flashbacks to heroes from history encountering a mystery object; a villain from the Superman books; a poignant moment with Genius Jones
co-opt him for the team!); a surprise guest star from Starman; a too rare appearance by the Power Company; a wonderful scene with Cyborg and Head - sorry, Red - Tornado.

The prevailing tone is optimism, something we've not seen in a JLA book for a long time. Our heroes know there's evil to be fought, but they seem determined to leave the angst behind. A clever scene shows how Hal Jordan, Dick Grayson, Donna Troy and Koriand'r are feeling about the new dynamic. I might have said Green Lantern, Wonderstudy*, Batman and Starfire, but it's the personalities that are important here, not the roles. And that's where it seems I was wrong, dubious at the JLA being replenished with former Titans; in fact, mixing them with their mentor generation makes for an interesting brew. It's not that there's an old/young divide, it's that James is taking full advantage of the new mix - they're all experienced heroes, but haven't fought alongside one another much, if at all. And he adds even more fun by placing the team firmly at the centre of the DCU. Colourful characters, high adventure and exotic locales look set to be the way ahead for this book.

We also see the rest of the new League - Atom, Guardian, Mon-El, Dr Light - along with holdover Black Canary and soon-to-be-members Congorilla and Blue Starman. It's great to see such a large cast, committed to JLA involvement, and I like the idea of members moving in and out according to story, without undue drama.

The villains here appear to be alternate New Gods, and while proper introductions would be lovely, they're serving a plot function just fine.

The multiple narration at the start of the book, while reminiscent of earlier writer Brad Meltzer's technique, works better here, as James doesn't try to cram too much in, or sustain the device. I would, though, still prefer good old-fashioned word balloons, like they have in, y'know, comics.

In a clever touch, the heroes in the Second World War flashback are all characters then published by Quality Comics - Uncles Sam, the Ray, Blackhawk and Plastic Man.

On the artistic side, Mark Bagley's pencils have a terrific energy but he's still finding his feet with the characters - some pages look spiffy (Red Tornado, the Challengers sequence) while others are iffy (Dr Light chats to Donna, an awfully wispy Starfire). Maybe 30pp a month is too much for him - is JLA $3.99 for the foreseeable future, or just while the new team debuts? And there are three inkers here, all talented, but it'd be great to have one pair of hands finishing the entire book.

Pete Pantazis adds vibrancy with his colours, and Rob Leigh has fun with the calligraphy - the hand-lettering effect for Prof Haley's diary entry is an appreciated realistic touch.

* Hey, is it my fault fill-in Wonder Woman Donna Troy hasn't got a heroic name?
Justice League of America #42 review