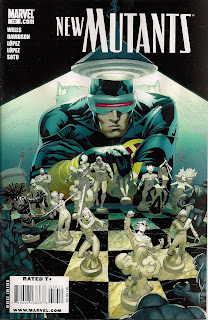 I used to love the New Mutants. The next generation of X-Men, they were a colourful bunch, with personalities and powers that set them apart from other mutant heroes. Their stories shifted from enjoyably X-Men-lite under Chris Claremont, Bob McLeod and Sal Buscema to insanely, entertainingly intense under Claremont and Bill Sienkiewicz. As the success of their book led Marvel to expand the number of X-teams and minis published, and the title transformed into the terribly silly X-Force, their uniqueness and charm vanished. As an X-line refusenik - I pop in and out according to levels of disappointment - I lost track of the likes of Cannonball, Mirage, Magik, Sunspot and Magma. My impression was that most have been either dead, depowered and evil at some point. Sometimes all three.

But last year they came back. Somehow enough members were alive, powered and good to try a new ongoing series. (Dani Moonstar, Mirage, is the exception, having lost her mental and Valkyrie powers, but she's a popular girl so gets to go on missions.) I tried the book, and rather liked the first couple of issues - it was good to see my old mates again - but apparently not enough, as I never got round to reading anything after #2.

Why indeed? Nostalgia, I assumed. Or maybe someone thought there was life in the old dogs (hang on, where's Rahne?) yet? But why do they exist in the Marvel Universe? As it happens, I rather liked the reason presented - Cyclops wants to see who emerges as the leader, as they're most likely to be his successor (and he needs measurements for a throne?) as King of All Mutants.

What's that, you cry? Cannonball is the natural leader? Always has been? Well, not according to Cyclops so far as this month is concerned. Other members come out of a mission to stop a bunch of mutates attacking Japan with more credit than Sam. To be honest, I'd say it was more a matter of bad luck, so it's a good thing Cyke isn't basing his decision on the one mission. He'll be keeping his big red eye on this crew.

I'm not sure I will be - I'll likely try next issue to see how things are settling down, but I could just as easily forget the series exists. The star of the show here is Cyclops - he actually had some personality, and a more attractive one than I've seen in ages. But he has plenty of books for character redemption, and it's the New Mutants I bought this comic for. They don't get much of a chance to show us what they're about: Doug Ramsey has one line demonstrating how he now understands the language of all things, before being told to shut up. Warlock jabbers like an annoying Star Wars comedy sidekick. Mirage is calmly competent, but dull. Karma curses unattractively. Sam is overconfident.

The only sparks come off Sunspot, who seems to have swapped arrogance for whininess and turned into a human cigarette when I wasn't looking. 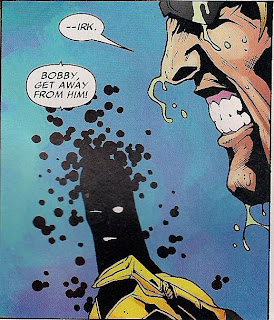 Or perhaps it's this old Superman foe in disguise. 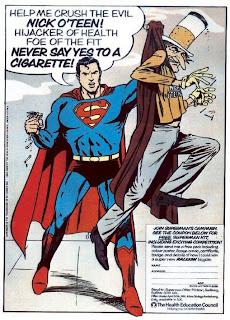 Obviously, the lack of New Mutant interaction is due to the space taken up by the commentary of Cyclops - watching the mission with Emma Frost from afar - but I'd rather have more show from writer Zeb Wells and less tell.

There was some good stuff in this issue: human pterodactyl Sauron is always good value, flapping away insanely, and he's niftily drawn by Paul Davidson. It's good to see an acknowledgement by Cyclops of what the New Mutants were created to be - the third team of X-Men, rather than a mere footnote in X-history. I liked Cyclops' rare optimism, and faith in the New Mutants to handle the Japan mission, in the face of a curiously witless Emma's doubt. And Cyclops has the line of the issue while discussing some doomy prophecy of Magik's (click to enlarge). 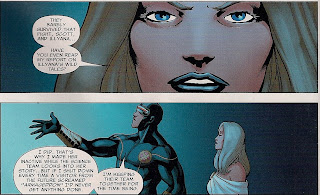 Yes indeed, for a New Mutants story this is a very good Cyclops focus. Still, it's pretty much a given that next issue our heroes will take centre stage once more, with Cyclops, if present at all relegated to a bit part.

Amusingly, there's a character in here whose power is 'psycho-dominant slime', which may be the best thing since shortlived, unloved X-Man Maggott and his detachable slug stomach. Slime Fella is named Worm, the other mutates are Lupus, Barbarus and Amphibius (Heaven knows why Worm isn't Wormus), whose appearances sum them up - wolf man, barbarian man with extra arms and frog man. It's just as well they're obvious types, as Wells doesn't particularly introduce them - they're just kinda there to be beaten up.

Sharing the art duties with Davidson are David and Alvaro Lopez - they give us the Cyclops and Emma pages - and while I like their elegant lines, a few more backgrounds would have been appreciated. Davidson's Japanese pages are busier, but never cluttered, and look fine, providing Soto Color with something to do other than swathe panels in blue.

I read somewhere that Adam Kubert's cover is a homage to something or other. Something, dull it seems. Likely some Dr Doom, Arcade or Grandmaster illustration - can anyone help?

To sum up, this comic tries to convince readers that the New Mutants title, and Emma Frost that the New Mutants team, should exist, while telling an entertaining story. The creators make a decent fist of things, but if they really want to convince me the book deserves a pull-list position, just go ahead and tell compelling stories with fascinating characters. Emma Frost? Who cares what she thinks?
New Mutants #10 review