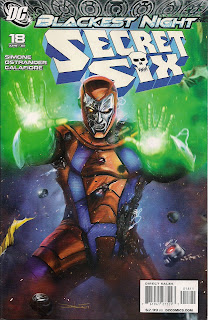 The Secret Six's encounter with the Suicide Squad concludes here with the factions teaming up to take down the Black Lantern Homicide Squad. Their secret weapon tallies with what we know about their weaknesses, but to my knowledge it's a first for the Blackest Night crossover.

This issue also sees the climax to Squad leader Amanda Waller's bid to bring Deadshot back into her fold, plenty of juicy interaction between both sides, and the revelation of Mockingbird's identity. And again, the truth is perfectly logical without having been stupidly obvious. We get a look at the Belle Reve cutting room, where heroes and villains are dissected, and it turns out an old DC hero works there. A member of the Squad is roundly thumped (and deservedly so) and a medical patch that puts Elastoplast to shame gets an outing. Busy busy busy!

It's good, mean-spirited fun from start to finish. That sly old bird Waller almost steals the show, but writers Gail Simone and John Ostrander give enough great lines and killer action to the rest of the cast to ensure she's more a star than a black hole. Even the Black Lanterns get in a few good lines, in between being shot apart and re-forming (as opposed to reforming).

Illustrator Jim Calafiore matches the writers for skill and style. His intelligently choreographed fight sequences show a grace possibly honed during his days on Aquaman - the best artists of the Sea King learn a rare elegance. 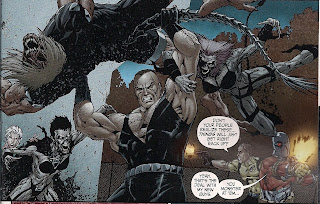 And when grace is allied to the undead Black Lanterns, the results are bewitching. Calafiore's bruiser characters, such as Bane and Catman, have a rough-hewn beauty, the good guys are Buster Crabbe handsome, the women reek of power. And it's all in the service of storytelling, there's not a single wasteful splash here . . . I can't wait until Calafiore takes on a regular assignment once more.

Jason Wright's colours are the icing on the cake - the moody tones, as ever, match the Six's souls, but here they're contrasted against the brilliantly burning House of Secrets. Travis Lanham's lettering is spot-on too. Heck, just seeing his Ragdoll font makes me happy. Before we eyeball any interior artwork, though, it's Daniel Luvisi's cover which makes a big impression, featuring an android Manhunter ablaze with energy. Editor Sean Ryan, take a bow for pulling such a cracking creative crew together.

The story comes with the promise of a sequel, but I want more. I want an ongoing Suicide Squad book written by John Ostrander, with art by Calafiore. That's not too much to ask, is it?
Secret Six #18 review Simone Ostrander Calafiore Wright Lanham Luvisi Ryan