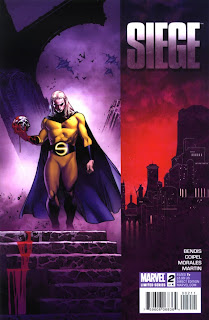 This issue, an Avenger dies!

Not 'alf! Before reading this I'd seen internet hints, but managed not to be spoiled as to who was slain, and how. Needless to say, it wasn't who I was expecting, and it wasn't how I was expecting.

And that's all I'm saying, other than if you've not read it yet, have a strong beverage at the ready, because Olivier Coipel and Mark Morales's art is unflinching. It's a treat throughout, packed to the gills with intense battle scenes, ethereal gods, sinister mortals and shining heroes. Laura Martin's colours add another dimension, and Chris Eliopoulos drops a variety of functional fonts.

Brian Bendis follows his cracking script for issue #1 with an equally strong continuation. I've a minor quibble regarding the rescue of Thor from have a dozen alpha level bad guys by two ordinaries, armed only with a (admittedly big) gun and a truck, but nutty things happen in the Marvel Universe, and it made for one heck of a hoo-rah moment. The returned Steve Rogers channels his inner Uncle Sam for a speech to his troops which is actually inspiring rather than corny and Asgardian gatekeeper Heimdall is a strong early contender for the Eeriest God Award 2010.

There are two more issues to go and if they're as good as this, Marvel's dark days are going to end in fine style.
Siege #2 review