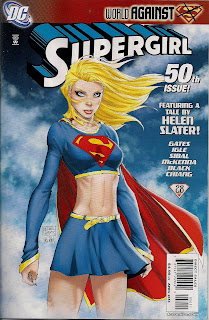 It's Supergirl's big anniversary issue, a time to celebrate. So why am I feeling a bit flat? The story's inventive enough, with Supergirl battling to save Metropolis from Insect Queen. There are heroics aplenty, and Kara impresses by designing the tech that saves the day, something her more famous cousin couldn't do. There's a strong showing by Dr Light, astronomer turned superhero and the Superman Family's all-purpose scientist du jour. There's even an addition to the supporting cast as Jose Delgado - Gangbuster - shows up, which must please his fan no end. Superwoman is alive, well and evil as hell in a bookend subplot.

Best of all, Lana Lang - who recently succumbed to a mystery bug - is hale and hearty by story's end.

But it's the Lana business which brings down the gloom. Thing is, Lana spent ages not telling Kara about her illness, which proved to be part of Insect Queen's plot. Said plot came to fruition and several Metropolitans died. Supergirl blames Lana for not trusting her with the fact of her mystery illness, and says she doesn't want to be around her anymore.

If Lana made a bad call, it was for the right reasons - Supergirl had plenty of other things to worry about, so Lana was quietly getting the best doctors to investigate. In a moment of near-metafictive awareness, she tells Kara: 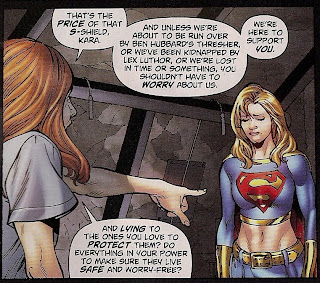 But does this appease Kara? It does not; despite having insisted to Insect Queen earlier that 'fighting is what we Langs do', she doesn't want to be a Lang anymore because Lana ain't perfect. Suddenly the former princess of petulance is lecturing a woman who cares about her, and gave her a home, on right and wrong.

It's not one of Supergirl's better moments, representing a step backward in Kara's development as a person; a throwback to the unlikeable teenager represented on the late Michael Turner's inventory cover.

I expect different from writer Sterling Gates, who made it his business on joining the book to transform Kara into an admirable character, as opposed to the confused kid who won't listen to anyone, who lashes out. Likewise, suddenly Kara is swearing in Kryptonian this issue - what's Kryptonian for 'it's not big and it's not clever'?

I suppose I shouldn't nag a book purely because it doesn't meet my expectations, but if you can't whine on your own blog . . . darn it, I like the Lana/Kara friendship. While we've seen barely anything of Supergirl's secret ID, Linda Lang, we're told here that she's had it for a year. Now it seems unlikely we'll see Linda interact with Aunt Lana for awhile. Get it sorted, Gatesy! This (sweary moment aside) is the wonderful Supergirl you've given us, bring her back. 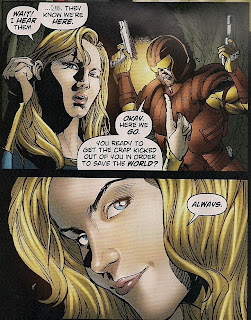 And doesn't she look good? Sterling's artistic partner, Jamal Igle, backed by inkers Jon Sibal and Mark McKenna, produces first class superhero comics here. Supergirl looks noble, Insect Queen is creepy as all get out with her titchy extra arms, Superwoman is crazed, Lana sympathetic . . . there's nary a misstep to be found (psst, Gangbuster's costume is tragic, redesign it or bring back the old one!). The artists look to be having a whale of a time drawing Insect Queen's creepy crawly cohort, especially in a spread which has Supergirl and Gangbuster overwhelmed by them.

Colourists Nei Ruffino and Pete Patazis add extra life to the pages, while Jared K Fletcher is the innocent letterer forced to endure the cusses from Krypton.

There's a back-up too, a harmless short summing up public perception of Supergirl over the past four years, with an injection of Joseph Campbell. It's a tad pedestrian, but does the job, and the sentimental part of me is rather pleased to find it was co-written, with Jake Wood, by one Helen Slater, the big screen Supergirl. And anything that gets Cliff Chiang drawing Supergirl has to be good - I think this is the brightest I've ever seen his work rendered, what with his more usual stomping grounds being in DC's grittier regions. Take a bow, Dave McCaig.

All in all, a thoroughly decent issue of Supergirl, but sadder in tone than I'd prefer for an anniversary.
Supergirl #50 review Gate Igle Sibal McKenna Ruffino Pantazis Fletcher Slater Wood Chiang McCaig