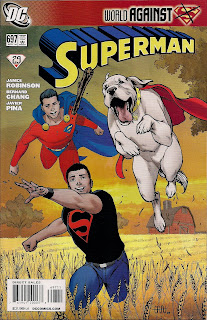 Behind a lovely Cafu cover featuring the slobberiest Krypto ever, it's bits of Legionnaire business all round. The Espionage Squad finally reveals itself to Mon-El; police colleagues, the deli guy, a hover-cam . . . future teens all. But we still don't learn what Chameleon Boy, Tellus, Starman, Sensor Girl, Matter-Eater Lad, Element Lad and Quislet are up to in the 21st century, as this issue proves a lead-in to the next issue of Adventure Comics, which will take us forward into the Brainiac & The Legion of Super-Heroes event in the Superman titles, which will herald the new Legion strip in Adventure Comics and its own book . . .

With Superman due to take back his own book in a few months, I'm valuing every moment we spend with Mon-El before his nigh-inevitable return to the Phantom Zone. Because of this I could do without the Legionnaires popping up all over the place, turning this book into a PS to writer Geoff Johns' Superman and the Legion story of a year or two ago.

The Legionnaires - despite my preference for them sticking to their 31st-century turf - are on good form. It's especially good to see Quislet in his first featured appearance for decades (even if his usual powers aren't on display), while Sensor Girl uses her illusions well - but please God the tweaked uniform turns out to be a mirage, she looks like Drag Queen Projectra.

We don't see much of the Guardian this issue, even though he's meant to be sharing the book, but Steel - incapacitated since a fight with Atlas awhile back - shows up and helps Mon-El bash some giant or other. And Metropolis is delighted. Me too - John Henry Irons is one of the best characters to come out of the Eighties and I like seeing him whack bad guys with his massive weapon.

James Robinson's Mon-El remains likable, still a little out of touch with the ways of the world, but learning fast. This issue also features a flashback chat in Smallville with Superboy and a scene with girlfriend Billi, but all that amounts to is them agreeing there's no time for anything other than scenes like this.

The art is split into chapters, with Bernard Chang handling the intense Metropolis fight scenes and Javier Pina looking after the pastoral moments. Both capture the required moods, though Pina deserves a special nod for his classically elegant Legion splash. Colourist Blond lends unity with a palate ranging from deep reds for Metropolis battles to pastels for Smallville.

Not an amazing issue, but it does hint at the potential a Tales of Metropolis comic starring Steel, Guardian, the Science Police and - if only - Mon-El could have. Maybe a special, DC?
Superman #697 review