Tails of the Pet Avengers #1 review 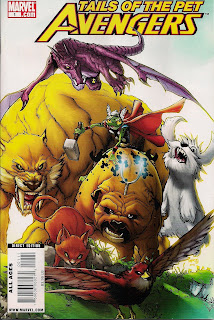 If I could talk to the animals I'd tell them to read this book - I love me some Pet Avengers. They had a great mini series last year, an ongoing begins next month and here's a special filled with solo stories of Earth's Mightiest Species.

The stories aren't as all-out funny as last year's mini, but they're clever, good-looking reads and none outstays its welcome. The only actual downer is the Frog Thor tale, with our hero displaying Asgardian-level pomposity, but it's still a decent palate cleanser for those of us drowning in Dark Reign. Zabu takes on new responsibilities in a vignette which doesn't have much room for fun, but leaves you feeling good anyway. Even the Lockheed entry, while mildly sick-making in a L'il Carrie way, had me aahing at the end.

The rest of the stories were souffle light, my absolute favourite being poncified pooch Ms Lion's attempts to nip a poisoning incident in the bud. 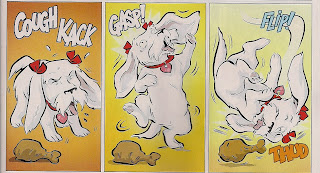 I laughed out loud, thanks to writer and artist Colleen Coover.

Ms Coover of the charming line also draws the Redwing strip, while 'the two Gurihiru ladies' handle Lockjaw and Zabu and I can't wait to see more of their sleek, characterful work. Ig Guara, artist on the mini series, is on typically gorgeous form with Frog Thor, while Pet Avengers creator Chris Eliopoulos draws appealing characters in the Lockheed strip but skimps on the backgrounds. Mr Eliopoulos also writes some of the scripts, grabbing him back some credit, while Scott Gray, Buddy Scalera and Joe Caramagna pitch in too.

Humberto Ramos gives us a tremendous group shot for the cover, and I'd also like to shout out production goddess Irene Y Lee for a very snazzy contents page (you find a lot of this sort of thing in editor Nate Cosby's books).

Overall, a fun taster that makes me want the main event - the Pet Avengers reunited - even more, for as adorable as these heroic beasts are, they're better together.
Tails of the Pet Avengers #1 review Chris Eliopoulos Colleen Coover Ig Guara Gurihiro et al