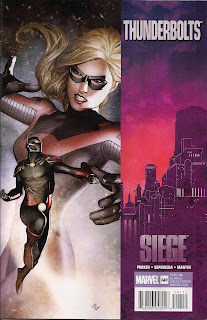 It's a Siege tie-in so the Thunderbolts are off to Asgard to purloin the fabled Spear of Odin. No one's actually sure what it does, but when Norman Osborn tells the bad boys 'steal', they steal - though not until they've had their transport craft downed by Hogun the Grim. Luckily they're near the Asgardian armoury, so our heroes - sorry, villains - Paladin, Ant-Man, Mr X and Scourge set about breaking in while the gods are distracted by Osborn's little party outside the city walls. Cue lots of fun as mission leader Scourge gets increasingly cranky and the rest of the gang eye up the godly gold.

And when the Thunderbolts finally get their hands on the Spear of Maguffin the Mighty Avengers arrive. OK, so that's a last page event, but I'm hardly spoiling given that Adi Granov's attractive cover shows MA Stature looking down on Ant-Man (well, just over half the cover, the rest is the picture of Asgard's Purple Gasworks that's perched boringly on every sodding Siege tie-in).

I can't say I connect with any of the current Thunderbolts - apart from the traditionally dull Paladin and one-note comedy coward Ant-Man, they're pretty much all bargain basement psycho killers. Well, I suppose roboty oojamaflip Ghost is unique, but after about a year of him in this book I've still no grasp of his limitations or agenda. Still, the mix of characters isn't writer Jeff Parker's fault, he never picked the team; he's just making them entertaining before they're mostly booted out for his upcoming, promising revamp. Adding in the Agents of Atlas last month was a good move, and the Mighty Avengers next month helps too. This issue, though, it's just the four on-mission operatives, with Ghost plotting on the sidelines. Nevertheless, Jeff's grasp of plot and way with dialogue ensures a fun few minutes.

Holding his own against the talented Mr Parker is artist Miguel Sepulveda, a new name to me but one I'll be watching for in future. His people are powerful without being entirely unlikely, he knows how to capture a facial expression and he conjures up a fine Asgard - for once the place looks like a city rather than a bunch of geometric shapes. The finishing touch comes from Frank Martin, whose colours are always suited to the scene, while Albert Deschesne letters with verve and clarity.

I'm chomping at the proverbial bit for the next stage of the Thunderbolts' life, but good value issues such as this will keep me happy until then.
Thunderbolts #141 review