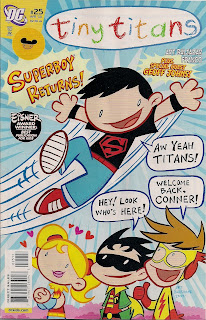 They're making comics you know, but not for me.

I love that DC publishes a line for little kids, and have drooled over the like of Batman: The Brave and the Bold on occasion. Tiny Titans? Not so much? I tried a collection of Art Baltazar and Franco's stories, then filed it under 'colourfully bland'. I see how it's going for 'all ages' appeal via exceedingly cute takes on Titans characters, but when the likes of Deathstroke are regulars, and Power Boy and Terra can show up to play with the gang, I get confused.

'Hey Mom, who's Principal Slade in the big kids comics?'

'Oh, he's a murderer with a liking for under-age psycho tarts.'

'That would be the under-age psycho tart'

Yet it's apparently doing decently in sales, and has won an Eisner Award as Best Publication for Kids.

But the latest issue is terribly keen for older folk to buy it, yelling that it features 'special guest Geoff Johns', And lookee on the front, it has his revamped version of Superboy, returning to the book.

And indeed he does show up, bringing a tiny version of usually murderous Bizarro clone Match with him, who eats chairs and fights with Krypto. Another story has the kids become colourful Green Lantern types after getting rings from Mr Johns''s Sidekick City Pawn Shop and Bubblegum Emporium, which may give this book some oddball movement in the back issue market (come on DC, reprint it with a Blackest Night banner!). 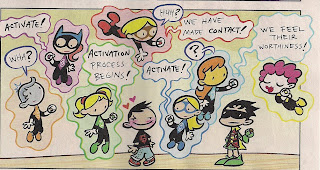 Really though, I don't get the appeal of the comic - it doesn't seem witty or clever enough for older readers, while the choice of characters and subjects seems a bit weird for younger ones. But it seems to be a success, so good luck to it.
Tiny Titans #25 review