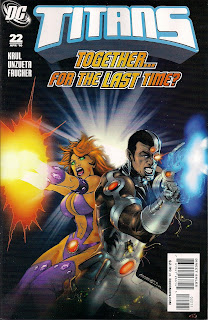 It's the final issue of The Titans. Well, sort of. The book continues next month with murdering madman Deathstroke helming a new villains-for-hire team, but no one cares. So let's say goodbye to Nightwing, Raven, Flash . . .

. . . hang on, none of them have featured roles here. Let's say goodbye to Starfire and Cyborg, and a brief seeya to a basically cameoing Donna Troy and Beast Boy. The storyline is that writer JT Krul, tasked with ending the run, fills pages with the old 'worst nightmare' shtick. Artists Angel Unzueta and Wayne Faucher make things look good and were likely delighted by the amount of big panels and splash pages required.

Oh the drama! The first few pages see Cyborg leading a team of Titans into a massacre, something all too believable given DC's handling of its teen heroes these last few years. But his worst nightmare? Surely by now said scenario is like counting sheep to the tin man?

What could Starfire's bad dream be? Being made to wear something that covers her body? Nope, it's being left all alonio - which might have made for some tension had special guest villain Phobia not announced this before we join Koriand'r for her unsweet dreams. A two-page spread of Starfire, terror-stricken because the Titans' Hall of Dead Types contains statues of Donna and co, is never going to be effective when we know going in that none of this is real. It's a pointless waste of pages, and my money. Even the characters admit Phobia has no specific motivation for her attack (click to enlarge). 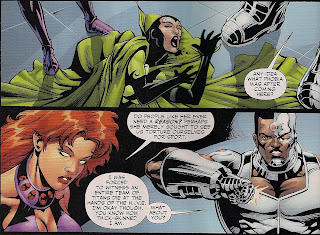 The book also fills more pages, unconvincingly, with an irrelevant recap of Phobia's history. It's horribly 'poor me' as she takes no responsibility for being a cold-hearted cow. The woman talks gibberish (click left).

Phobia's recap features a reference to the rightly derided Salvation Run mini series of a year or two back. Bad mistake, DC . . . when something doesn't work, ignore it, don't keep reminding us. Let it fade. (See also the continued references to Amazons Attack, the very definition of crap comic scab picking).

The issue ends with Phobia defeated but Starfire miserable, wondering about her place in the universe blah blah - you know, the sort of issues she conquered decades ago. Presumably this indicates that Kory Needs Purpose, 'explaining' her joining the new Justice League; I'd rather DC simply presented Starfire as the strong character she's been for ages, and simply have her join the JLA because she fancies trying something new - being a superhero is her job, after all. Why not a change of company?

I really do hate phony angst. Yes, we're superhero fans so expect a bit of 'everything you know is wrong' or 'the end of the Titans!?' but this issue's cover line, 'Together . . . for the last time?' is especially rubbish. Together again? Nope, Starfire and Kory don't fight together here. For the last time? Not when we've already seen both joining the JLA earlier this month.

The creators on this issue are good. I've enjoyed their work lots in other comics. But assigned to make a bridge between one failed series - this Titans run never caught the readers' imagination - and the revamp of another, they've come up with an awfully weak construction.
Titans #22 review