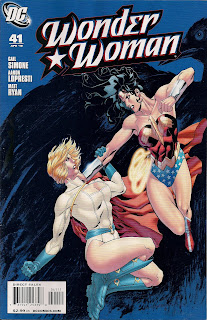 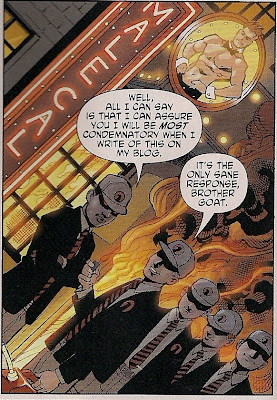 And I have to write about this on my blog, but not because it's awful. This is a wonderful comic, as two of DC's foremost femmes fight and neither one comes off looking like a pillock. It's traditional for an otherwise star to get a slightly worse showing when they're guesting, but Diana proves a gracious host. Sure, she hands out a beating to Power Girl, but it's done with respect and affection, and Karen's strength of body and character shows through. Inch by inch and aided by Diana's lariat of truth, she shakes off the deceitful influence of the Crows - the creepy schoolboy sons of Ares - and finally surprises herself with just what she's able to pull off.

And she does it because Diana inspires her. This isn't the Wonder Woman we've occasionally seen in other comics, whose heroine peers resent her supposed perfection. Peege know how good Diana is, and that Diana knows it, but she doesn't resent her for that - she admires her, as Diana likes and admires Power Girl. They're competent, confident metahumans and they can not only work together, they can enjoy doing it.

After they fight for a bit, of course. And the tussle is superb - writer Gail Simone apparently put all the description into the script, trusting pencilling partners Chris Batista and Fernando Dagnino to get the information across. And there's no need for another layer of narrative when Chris, for example, so perfectly describes Diana summoning her aegis shield to block Power Girl, Peege giving Diana a hearty side-on kick and so on. We see how Karen can throw a punch, and how Diana can take it, match it and raise it. We see Diana's super-speed, Karen's relentlessness. A minor complaint would be that we don't see Power Girl try any of her sensory powers against Diana, but I'll put that down to her being not quite herself (and Peege is, at heart, a brawler).

Eschewing fight descriptions leaves space for Gail to give us dual narratives - Travis Lanham's letters and thunk boxes ensure we can always tell who's talking to us - presenting each heroine's perspective. Diana is sharp and funny, analytical and wise, especially when she's thinking about where she and Peege differ. The slight air of pomposity Diana occasionally displayed in early issues, as Gail was fishing for her voice, is gone. Gail's Diana is now, to my ear, pitch-perfect. She's a formidable heroine and a person I'd want to spend time with.

And Power Girl ... Gail gets her first time out, capturing the voice of Peege as heard in Justin Gray and Jimmy Palmiotti's superb series. Maybe it's because Karen is naturally as sassy as one of Gail's Birds of Prey, perhaps it's down to the Gray/Palmiotti character being so well-defined . . . whatever, Gail presents a Power Girl who should have her fans cheering.

By the end of the book Diana and Karen have taken down the Crows, but not before one of the little brats pays a terrifying visit to Diana's pals Steve and Etta. Also around this issue, but involved in his own issues, is Achilles. He's mellowed from the Zeus zealot he originally seemed, and moving to Man's World to pursue his reformatted mission of peace. And if he meets the reincarnation of a former lover along the way, well, where's the harm? Who knew Diana had a spot of Dolly Levi in her?

Achilles' journey from the mystical isle of Thalarion to the mundane world of America showcases Chris Batista's skill with monsters. The two-trunked, three-eyed flying elephant Mysia looks stunning as ridden by the armoured Achilles. And then we see that the reborn hero has an equivalent to Diana's clothes-changing twirl, as he spins, while seated, into 21st-century threads (but lose the naff winged collar, kiddo). It's a good-looking sequence, but it's in the fight between Diana and Karen that we really see what Chris can do.

A talented draftsman who draws great people - look at new guy Patrick this issue - along with convincing action and splendid backgrounds, Chris would be welcomed back by me anytime, especially if Doug Hazlewood adds his powerfully delicate inks, as here. Without distorting his own style, Chris uses series artist Amanda Conner's Power Girl as his model, and gets her down pat. The face, the body language - there's no doubt this is the same goddess next door as seen in her own book. I hope some Wonder Woman fans check that book out after this issue (and Chris' excellent work with former Wonder Woman writer Gerry Conway on the just collected and just superb Last Days of Animal Man trade).

A favourite panel sees Chris, aided by the ever sympathetic colours of Brad Anderson, show us what the befuddled Power Girl is seeing, a monstrous version of Diana.

Now if that doesn't spawn an action figure (DOLL!) within the year, I'll be a blue-eyed grasshopper.

Our other guest penciller, Fernando Dagnino, is less on-model physically with his Power Girl, but he captures her spirit in a hotdog-eating sequence, and produces some stellar pages, inked by Raul Fernandez. Their compelling presentation of the Crows pretty much ensures someone will bring them back one day. And they give great monkey.