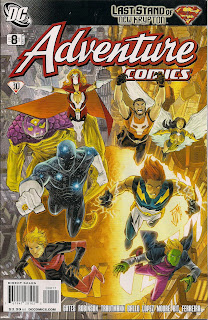 The waiting's nearly over. Soon the Legion of Super-Heroes get their own book again. Two books, in fact - for a while, at least. Before that they're guesting in a big Superman event for which this issue of Adventure Comics provides three prologues.

The first story features the Legion in the 31st century as a seemingly standard rescue mission reveals a threat from the 21st century. Its first three pages focus on Legion genius Brainiac 5, explaining why the heck Querl Dox uses the title of his mass murdering ancestor. The rest gives us teasing glimpses of such old favourites as Lightning Lass and Timber Wolf, who has developed an annoying vocal tic, 'Hrrf. Do wolves go 'hrrf'? I suppose they must.

Anyway, no sooner is the story begun than it's over, referring us to the continuation in this month's mercifully short mini series, Superman: Last Stand of New Krypton, which follows the damp squib that was Superman: World of New Krypton.

In his first Legion outing Sterling Gates shows the confident touch he's brought to Supergirl, blending superheroics, character and plot to great effect. Travis Moore and Julio Ferreira provide attractive artwork (they're especially good with noses - don't laugh, so few artists are!), which Pete Pantazis colours with intelligence. And Steve Wands shows that his natural super-power is lettering. I loved this l'il Legion story, consider my appetite for 31st-century tales of the LSH well and truly whetted.

Prologue 2 shows the 21st-century Legion Espionage Squad reveal themselves to Conner Kent, and then explain to Mon-El that they don't actually know very much about why they're in his time. It's strictly bridgework, introducing a few more Legionnaires to new readers before they take part in the mini series mentioned above, but it's a pleasant read courtesy of James Robinson. The reason given for the members hanging around Superboy and Mon-El for months doesn't bear even a moment's examination - Legion benefactor RJ Brande wanted them to watch over the pair and bring them on as heroes before they're needed by the Legion - but it provided an excuse for the future teens to pop up every now and then, building anticipation for this issue's reveal. 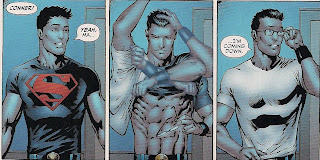 Sensor Girl looks hideous, mind, but what can you do? My only real complaint is the physical similarity of Conner and Mon-El - I know Clark Kent originally mistook Lar Gand for his big brother, hence his bestowing of the El appellation, but Conner's a new generation. And half Lex Luthor (allegedly). 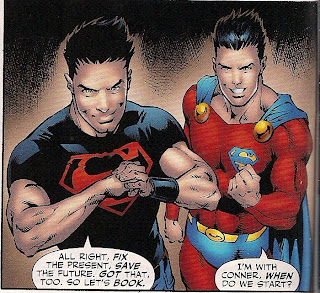 Lord, it's like Jedward with super powers, a thought far scarier than an invasion by the original Brainiac.

Pete P colours again, and leaves the artwork looking so damn happy it's as if he's been waiting all his life to enliven Matter-Eater Lad and Tellus. And Mr Wands letters once more.

He works on the final story too, though the colouring baton is passed to Blond, whose muted choices suit Pier Gallo's sensitive art for this tale of two fanatics - Kryptonian sleeper agent and bad pun Cer-Vax, and US Army General Sam Loon . . . sorry, Lane. The former I could care less about (she's an accidental killer turned zealot for Zzzzod) but after more than a year as the main antagonist in the Superman books it's excellent to see Lane fleshed out. Finally we see a little of why he has such a stick up his military arse when it comes to aliens, despite the always benevolent actions of Superman. It boils down to fear, and while this doesn't make him any more sympathetic, it leaves him more believable.

Eric Trautmann, currently co-writing Action Comics, turns in a splendid pair of character studies. The guy's work is Brainiac bright, but never boring. I hope he sticks around DC once the Flamebird and Nightwing strip in Action Comics ends.

Ugly old Sensor Girl apart, I like Francis Manapul and Brian Buccellato's cover, which features Legionnaires from the 21st and 31st centuries in a subtly split image.

While I'd have likely relished the first strip in this issue filling the book, for what it was - a bridge between two Superman events - this comic was admirably entertaining. 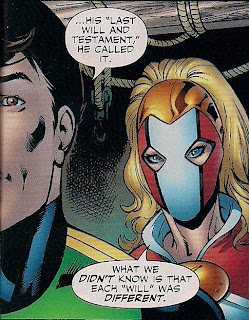