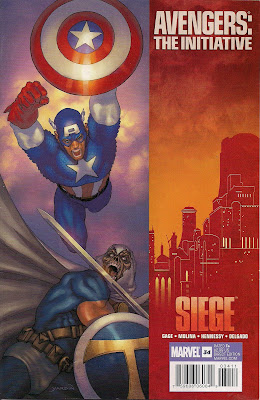 On the one hand, there's not much point trying to persuade anyone not reading this book to join the party; it's cancelled in a month or so, as the Avengers titles realign.

On the other, it would be a shame to ignore excellent work simply because the book is ending.

So behind a gorgeous half-cover illustration from David Yardin here's another event tie-in, with moments also seen in Siege #3 (reviewed below). For a change, though, the events shown in one comic are accurately reflected in another, and they don't take up so much space as to make me feel I'm not getting my money's worth the second time I see an exchange of blows and barbs. For said scene - the confrontation between Captain America and Taskmaster - was simply one large and memorable panel in Siege, and here we see what happened next, a cracking fight between Taskmaster and . . . Bucky Cap. And what we do view again here is worth another look as presented by penciller Jorge Molina and inker Andrew Hennessy. I don't recall seeing this artistic pairing previously, but I want to see a lot more of them. 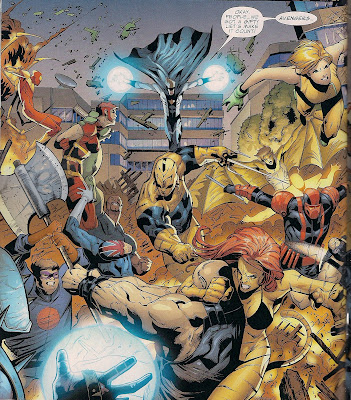 This is good superhero storytelling - solid, crystal clear, loud for the battle scenes, subtle where needed. It's not perfect, with the occasional squished-looking head and a too-stocky Spider-Man, but they've drawn several dozen characters here, likely to a tight deadline, so they get some slack. I want Molina and Hennessy gifted a regular assignment - and if they're re-teamed with this month's tremendously talented colourist, Edgar Delgado, so much the better.

Supplying the words to be illustrated is Christos Gage, who finds time amid the sound and fury for standout character moments featuring such Initiative regulars as Night Thrasher and Justice. A scene readers have been waiting for since Robbie Baldwin transformed from Speed to Penance finally occurs, and it's not fluffed.

Even when this book doesn't involve dozens of guests from the rest of the Avengers line, there's a large cast, but Gage never fails to keep his superheroic plates spinning. Over the course of a few issues no one is off stage so long that you forget them, and newer readers are brought up to speed via introductory nametags when players arrive on panel; it's a device I wish more comics would use, and kudos to editors Bill Rosemann and Rachel Pinnelas for maintaining this piece of furniture. Gage - who moves from this book to the Avengers Academy start-up, hopefully taking several Initiative members with him - shines not only in character juggling, he's also adept at seeding dramatic moments and illuminating them with sharp scripting. It's a joy to read such a confident story, a crossover issue that serves the larger event while delivering on its own terms.

So forget what I said, it's not too late to hop on the Initiative bandwagon - buy this issue, buy the previous issues and be back for the series finale.
Avengers: The Initiative #34 review Gage Molina Hennessy Delgado Yardin Pinnelas Rosemann