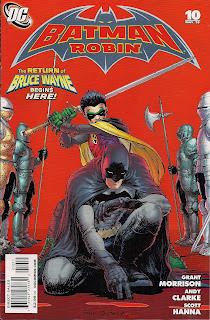 Never mind, no one doubts the original Batman will be back soon. Meanwhile, I'm relishing the Dick/Damian partnership, which gets better with each outing. Forget their chalk and cheese personalities there's a real affection developing between them. Despite the cover scene, that's very evident this issue as the prospect of finding Bruce alive hints that the new Batman and Robin team's days are numbered and Damian gets a little choked.

Choking is what his loving mum, Talia al-Ghul, would love to do to Dick for distracting her boy from his future 'greatness' but can she break them up? They're certainly working together well this issue as they scour Wayne Manor for clues left by any 'lost in the past' Bruce. Guiding them, and nearly stealing the show, is Alfred who, writer Grant Morrison reminds us, is an intelligence expert. The trio's conversation as they undertake their Bat-scavenger hunt is as engrossing as any action scene would be.

Which is just as well, as this is a fight-light issue. Guest detective Oberon Sexton gets as much play as the Dynamite Duo (he seems 'familiar' to Dick, and he has 'exceptional hearing' like a bat, but it's likely too obvious for him to be Bruce, back to solve the mystery of his disappearance). There's also an amusing boardroom scene in which Damian, 10, calls the Wayne Enterprises chiefs to account for missing monies, but it's the trawl through the Wayne family tree that provides the tastiest treat this issue. I can't wait to learn more about the likes of demon-summoning Thomas and saintly Solomon. That may actually come in the upcoming Batman: The Return of Bruce Wayne maxi-series but whatever fills this book it's going to be very good if Morrison retains this form - this is his best script in ages, combining mystery and character in equal parts.

Credit too to former REBELS artist Andy Clarke, who turns in a wonderfully clean, clear job, and Inker Scott Hanna makes the most of Clarke's contribution with delicate Brian Bolland-style brushstrokes. 'The Haunting of Wayne Manor' is this issue's title and the artists - including colourist Alex Sinclair - definitely capture a spooky mood. They also give us the cutest pet tiger ever, at the side of a very Marsha Cross Talia. Patrick Brosseau provides the finishing touch via friendly, clear lettering.

This is cracking superhero fun, with every page providing smiles. And Damian is a big part of the success of this run; he's gone from annoying brat to loveable foil without losing his edge. Whatever else happens, I hope he remains a prominent member of the Batman Family.
Batman and Robin #10 review