Batman: The Brave and the Bold #15 review 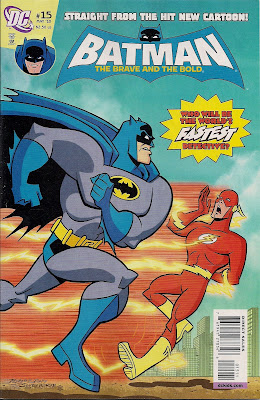 Like the TV cartoon on which it's based, every issue of this comic features two team-ups - a main story and a mini-adventure which acts as a prologue. The star guest this issue is Wally West, the Flash, but before that we get these two guys:

Brother Power The Geek I recognised, he's had some play in the DCU over the last several years (including an excellent issue of this comic's big brother, The Brave and the Bold). But Tadwallader Jutefruce, aka Super-Hip?

While I'd heard of him as a character from DC's Sixties Bob Hope book - he's the classic comedian's super-powered nephew - I'd never seen him. But on clocking the heroic Hope chin, it all makes sense. Who better to team up with Batman to take on the Mad Mod on a time trip to Swinging London? And Brother Power is the perfect third tag team member when politicians are enchanted by Carnaby Street fashions. Don't worry, it all makes sense . . .

... well, as much sense as anything in this simply smashing vignette. Honestly, the comic could have ended after those first three pages and I'd have had my money's worth. But there's lots more, as the Flash, having given Batman a Cosmic Treadmill trip home, challenges his fellow Justice Leaguer to solve a mystery in Keystone City before he does. Batman may have the detective skills, but Wally has the speed and the local contacts.

As for what happens, I'll shut up and invite you to spend $2.50 on a comic that's pure pleasure and find out for yourself. Writer Sholly Fisch, penciller Robert Pope and inker Scott McRae provide the proverbial feast of fun and pretty much define 'all-ages' comics. There's the pace today's kids demand alongside a Silver Age science lesson for us old guys, originality for everyone and jokes for anyone who gets them. Love of the DC Universe shines on every page of 'Minute Mystery', whether it's the car driven by the villain of the piece, the Carmine Infantino cityscape or Flash's very logical informant. It's old home week for the likes of me, and a new world of wonder for the younger set.

And Sholly doesn't skimp on the characterisation, making a better fist of presenting the relationship between Batman and Flash than we've seen in many a more 'mature' comic.

Pope and McRae's cartooning is wonderful - dynamic and fluid. The figurework is deliberately simpler but the depiction of super-speed as good as any I've seen. And the colours applied by Heroic Age are a knockout, making everything pop despite the cheerfully low-grade paper. Let's not forget Rob Clark Jr, whose lettering is extremely attractive, with all the correct emphases - sure, these are almost certainly indicated on Sholly's script, but it'd be easy to miss a few. I'm certain Rob didn't.

It's safe to say I enjoyed this comic more than anything this side of Power Girl this week. It's suitable for kids, yeah, but it's as sophisticated a product as any other superhero book out there - Brave, Bold and Brilliant.
Batman: The Brave and the Bold #15 review Sholly Fisch Robert Pope Scott McRae Rob Clark Jr Heroic Age