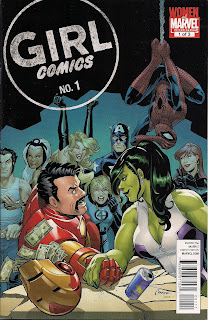 I'm not too sure how to approach Marvel's latest anthology series. The fact it's being sold on the back of being by all-girl creators suggests I search for a 'female sensibility'. On the other, that would be like holding Girl Comics to a different standard to other superhero comics, which usually have a male bias in the creative team. Some comics I like, some I don't, and I never attribute my reactions to the gender of the creators.

So the heck with keeping an eye out for anything approaching an agenda, let's just see what's in there.

The cover's by Amanda Conner and as delightful as I've come to expect from her, with She-Hulk - whose 30th anniversary has ignited Marvel's current female focus - beating Iron Man at arm wrestling, watched by the the fine ladies and gents of Marvel.

The first feature is the closest Girl Comics has to a statement of intent, with Colleen Coover writing and drawing a two-pager that has a batch of heroines explain what they are, and aren't, about. It's a whimsically drawn piece whose message boils down to 'let's just get on with it' - a favourite sentiment.

Next up we have Nightcrawler rescuing a damsel in distress at the cabaret. And she rescues him right back. It's a simple story, with the unique selling point that the narration comes via moritat - a murder ballad. It's a toughie to pull off in print - Alan Moore tried it in Warrior's V for Vendetta strip with This Vicious Cabaret, which may have been one of the inspirations for G Willow Wilson's story. I'd love to hear the ditty here set to music, though, for the fun of it. Maybe Marvel has a smoky-voiced in-house chanteuse who could put the song across on a podcast? Meanwhile, good on Willow for trying something different, and Ming Doyle for so ably illustrating - the first shot we see of Kurt superbly captures the essence of a man you can never truly know. 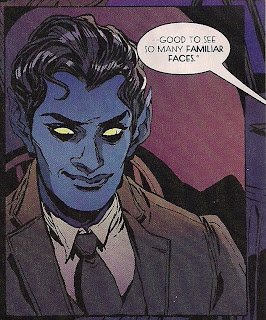 And I love that he wears sock suspenders.

Venus, of Agents of Atlas fame, solos in a tale which has her betting Zeus that her powers of femininity are as strong as Hercules' strength. So it's off to Manhattan for an adventure involving supermodels and secret affairs. There's a hilarious gag which shows that even a burka can't stop Venus recognising . . . oops, can't spoil that! But this is adorable fluff from Trina Robbins, here writing 'only', for the terribly talented Stephanie Buscema, whose retro linework is simply joyous.

And the tattoo she's designed for a certain cast member is perfect.

In a Punisher short featuring the world's scariest shower curtain, he takes on one of the bogeymen of today. There are no surprises but, appropriately enough, the story is well executed by Valerie D'Orazio and Nikki Cook, with both script and art nicely nuanced.

Sana Takeda contributes a pin-up of She-Hulk which acts as a sequel to a 1992 John Byrn poster. It's birthday cheesecake for the big green gal.

My favourite story of the issue is a two-pager by Lucy Knisley which has Dr Octopus on a shopping expedition - it made me laugh out loud, yet manages to be oddly touching.

A perfectly in-character Franklin and Valeria Richards feature in a twisted fairytale that morphs from comic strip to storybook via the talents of writer Robin Furth and artist Agnes Garbowska. It's a pretty safe bet I'm going to be having nightmares after this one.

Finally, it's back to the period when Jean Grey was still alive (well, one of the periods) for a look at the relationship between Jean and Scott Summers, and Jean and Logan. Jean and Scott help Wolverine beat off various attackers, Scott notices how the other two look at one another and Jean denies any impropriety. It's well-observed soap from writer Devin Grayson, but we've seen it too many times previously, and it left me feeling rather gloomy. Mind, there is a good joke, with the ever-under-attack Logan having forgotten why he's being assaulted this particular time. Emma Rios supplies wonderfully alive artwork in the issue's most action-packed segment.

Capping off the issue are much-appreciated features on Marvel legends Marie Severin and Flo Steinberg, and creator bios. Girl Comics proves an enticing package, full of variety in subject and approach, and you can be sure I'll be back in a month to see what's next.
Girl Comics #1 review